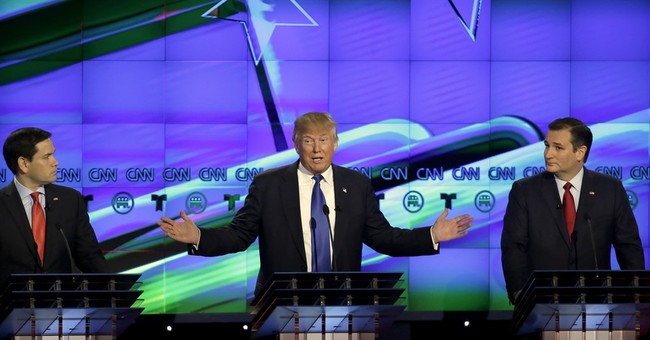 It didn’t take long for Sens. Marco Rubio (R-FL) and Ted Cruz (R-TX) to start attacking Donald Trump. The CNN debate began at 8:30 p.m., but it took less than a half hour before the two senators, who desperately need to do something to increase their chances of winning the nomination, to attack the billionaire businessman.

The issue of immigration allowed for both senators to slam Trump for hiring illegal immigrants on construction projects and for reversing his positions on the issue. Rubio claimed that the billionaire discussed legalization in 2011, and blamed Romney for losing the 2012 election for pushing self-deportation. Trump countered by saying that Romney was a terrible candidate who lost a winnable elections. He ran a bad campaign. He then took a swipe at Rubio for his reported misuse of credit cards from the Florida State Republican Party, which has been relegated as a nothing burger. Yet, on the claim that Trump hired illegal immigrants for his construction projects, the Donald said that the laws were different back then. Oh, and the project was Trump Tower.

As Christine noted, Cruz slammed Trump for his celebrity status, saying that while he was fighting amnesty in the Gang of Eight legislation, the billionaire businessman was firing Dennis Rodman. Cruz also mentioned Trump’s donations to Democrats working on that bill. Lastly, Cruz backed Marco in his claim that Trump was found guilty of hiring illegals for his projects.

Trump touted his relationships with Democrats and Republicans, noting he get’s along with everyone because he’s a businessman. He also struck back at Cruz saying that he doesn’t have a single endorsement from a sitting senator, and that he should be ashamed of himself for that. Cruz responded that wanting to be liked in Washington D.C. isn’t a good attribute to channel for a would-be president.

Cruz and Rubio rarely got into prolonged spats between themselves, instead focusing on trying to chip away at the Donald. This was their last chance before voters head the polls in the various states set to cast their ballots on Super Tuesday. Trump has gone on to sweep New Hampshire, South Carolina, and Nevada. And he poised to deliver more punishment on March 1. The stakes are high for Cruz and Rubio, both of whom are working against the clock to usurp the prohibitive frontrunner, Trump, who is seen as a faux conservative.

Cruz is losing the voters he needs most–Evangelicals and conservative voters–to overtake the billionaire magnate, while Rubio needs to win Florida and one other winner-take-all state to catch up to Trump’s delegate count. Cruz also has to win his home state of Texas. If Cruz or Rubio lose their home states, the game could be over for both of them. The clock is ticking, and there may not be enough room for either candidate to utilize their respective strengths and mobilize the anti-Trump vote in time to defeat the Donald. Nevertheless, Cruz seems to taking to heart what some on his campaign have noted, which is that fighting both Trump and Rubio fares poorly and ends up benefitting the latter.

What is clear is that with Ohio Gov. John Kasich and Dr. Ben Carson still in the race–there’s not enough anti-Trump support to either of them to overtake the prohibitive frontrunner. One will have to drop out, though Dr. Carson and Kasich really need to have serious discussions about the future. Tonight explicitly showed that it’s a three-man race; Carson even begged for someone to attack him to get more airtime.