NY Congressman Charlie Rangel, Who Was Censured For Not Paying Taxes, Set To Retire 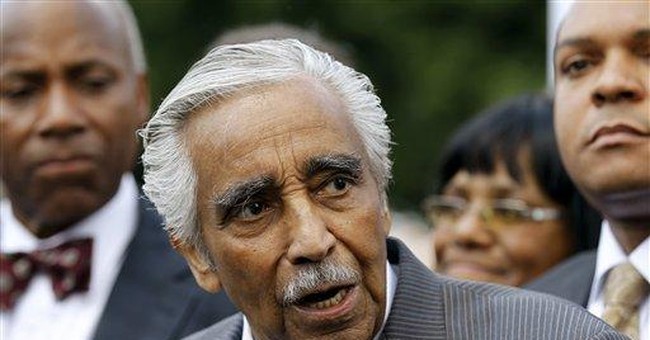 New York Congressman Charlie Rangel, who has been in public service for almost a half a century, is set to retire after his current term expires in 2017 (via CBS NY):

Harlem Congressman Charles Rangel is retiring at the end of this year after 23 terms in the House of Representatives.

The 85-year-old has spent 46 years on Capitol Hill. Rangel had announced that he would retire ahead of his last campaign. He said he wanted to leave office at the same time as the first black president, and survived a bruising primary in 2014 to do so.

“I wanted so badly to complete the last year with President Obama, and even though they never gave him a fair opportunity to do all the things that I really had dreamed that we could do together, I would be so annoyed with myself had I retired a couple of years ago,” Rangel told WCBS 880’s Jane Tillman Irving.

Prior to then-Sen. Obama historic 2008 election, it was discovered that Mr. Rangel has tens of thousands in income that he simply didn’t declare. To make matters even more embarrassing, at the time he chaired the House Ways and Means committee (via NYT):

Representative Charles B. Rangel, chairman of the Congressional committee that writes the nation’s tax code, failed to pay an unspecified amount in federal taxes during the past five years on rental income from a villa he owns in the Dominican Republic, his lawyer said on Tuesday.

Mr. Rangel, a Harlem Democrat who is chairman of the Ways and Means Committee, has owned the beachfront house at the Punta Cana resort and club since 1988, but never declared the $75,000 in rental income he has earned either on his tax returns or on his Congressional financial disclosure form.

Of course, with skipping out on one’s taxes, the House Ethics Committee investigated Rangel, where he was found guilty of 11 of 13 counts filed him in 2010:

A House panel on Tuesday found Representative Charles B. Rangel guilty of 11 counts of ethical violations, ruling that his failure to pay some taxes, improper solicitation of charitable donations and failure to accurately report his personal income had brought dishonor on the House.

After a public hearing on Monday that was truncated when Mr. Rangel walked out in protest, an adjudicatory subcommittee of the House ethics committee deliberated for four hours before finding him guilty of all but one of the 13 counts against him. (Two counts, involving Mr. Rangel’s misuse of House mailing privileges, were merged into one.)

In a somber tone, Representative Zoe Lofgren, Democrat of California and the chairwoman of the panel, announced the findings just before noon. Ms. Lofgren described the contentious process as “difficult and time-consuming.” The entire committee is to decide on Thursday what punishment to recommend for Mr. Rangel. The full House must vote on the recommendation.

In the end, the House voted to censure him by very large majorities in December of 2010:

The House voted overwhelmingly on Thursday to censure Rep. Charlie Rangel (D-N.Y.), who pleaded for leniency but now finds his 40-year career tarnished after his colleagues rebuked him using a rare form of public punishment for ethics violations.

The vote was 333-79, with 77 Democrats and two Republicans voting against censure, the harshest form of punishment short of expulsion from Congress.

Immediately following the vote, Speaker Nancy Pelosi (D-Calif.) formally called on the 80-year-old Rangel to stand in the well of the House to be informed that he had indeed been censured by his colleagues for series of 11 ethics violations.

Rangel obliged, rising from the center-aisle seat in the front row. He stood, feet shoulder-width apart with one hand clasped over the other in front of his waist. Members of the Congressional Black Caucus and New York delegations crowded into the first two rows behind him.

The ordeal was over in about 45 seconds, bringing a surprisingly anti-climatic end to a long battle that cost Rangel his gavel at the Ways and Means Committee and $2 million in legal fees, and nearly jeopardized his four-decade hold on a Harlem congressional district.

Happy retirement, congressman–and don’t forget that taxes are due April 18.