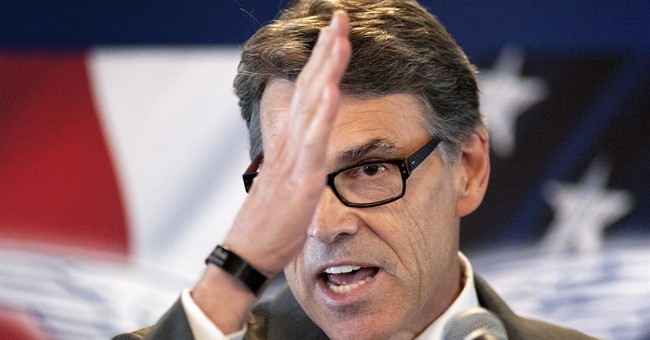 Former Texas Gov. Rick Perry scored a tremendous legal victory today. The state’s highest criminal court dismissed the final charge against him, which was part of a ludicrous abuse of power case. The legal fiasco erupted in August of 2014, when a grand jury indicted Perry on coercing a public servant and abuse in office for vetoing funds to a local Public Integrity Unit in Travis County since their district attorney, Rosemary Lehmberg, refused to resign after a drunk driving arrest. The New York Times described the charges as “overzealous.”

In July of 2015, the coercion of a public servant charge was dropped by an appeals court, but the abuse in office portion of the indictment was allowed to move forward until this morning. Yet, the former governor noted that the political damage was done, especially during his short-lived presidential bid (Dallas Morning News):

Texas’ highest criminal court on Wednesday dismissed the remaining felony charge against former Gov. Rick Perry in the abuse-of-power case that he blamed for his early exit from the Republican presidential race.

The Texas Court of Criminal Appeals tossed a charge of misuse of office that stemmed from Perry’s 2013 effort to force out the Travis County district attorney. And it upheld the decision of a lower court to dismiss a charge of coercion of a public official.

The 6-2 decision appears to mark the end of Perry’s 18-month legal saga — one that outlasted the end of his record-setting, 14-year tenure as governor and his short-lived second bid for the White House.

Perry had already signaled that resolution in the case would be, in some ways, too little, too late. He said in September that the indictment — which he blamed on the “drunk DA” — had a “corrosive” effect on his presidential campaign’s fundraising.

“The political opponents, they did their damage,” he said