As Rubio Leads Fight For Second Place, Senator Says The Children Of Reagan Are Ready To Lead 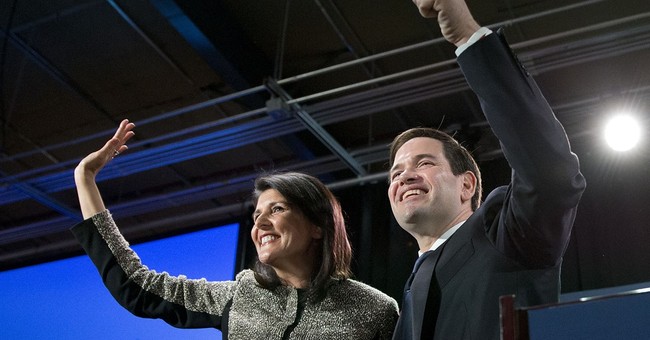 While Donald Trump had an exceptional night winning the South Carolina primary handily, Sens. Ted Cruz (R-TX) and Marco Rubio (R-FL) were left duking it out for second place. With 99 percent of the precincts reporting, it appears as if Rubio has clinched the second place spot, albeit by a hair. He addressed his crowd of energized supporters, congratulating Mr. Trump on his victory, declaring the race for the GOP nomination a legitimate three-man race.

He also noted that it’s time for a new generation of conservatives to guide us through the 21st century. A time for the country to return to the constitutional principles that make this country unique, while adding that the children of Reagan are prepared to take up the mantle of leadership.

The children of the Reagan Revolution are ready to lead.

“We are a nation and a people that celebrates success,” said Rubio. But added that while we celebrate those making up the social and economic ladder, we need to fight for those struggling to get ahead. The Florida senator addressed the working mom and dad working two or three jobs that their voices will be heard, and that he would fight for them. He also positioned his campaign as the best to win in 2016, to unify the party, and to bring the country back together after eight years of disappointment from President Obama.

One of the biggest obstacles to Rubio in this race, Gov. Jeb Bush, bowed out with grace tonight. What political dividends that may yield Rubio remains to be seen, but the millions of dollars of ads that were aimed at Rubio have ended. Yet, Trump’s chances of winning the nomination get better, as long as those candidates who have zero chance of reaching the top tier in this primary, let alone winning the nomination, remain.