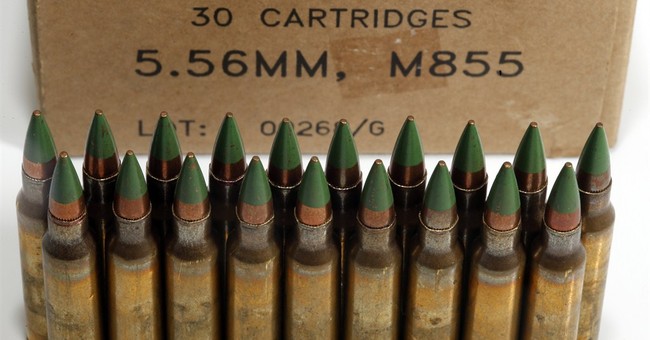 On February 13, 2015, Katie wrote an exclusive story about an adjustment in the Bureau of Alcohol, Tobacco, Firearms, and Explosives’ regulation guide that banned M855 “green tip” ammunition that’s commonly used by AR-15 owners. It was done under the pretext of “law enforcement safety.” If the change had gone into effect, it would have reclassified such ammunition as armor piercing, (which is nonsense) making it unavailable for civilian use. The ATF had a 30-day comment period on the new changes at the time:

The 2014 edition of the Federal Firearms Regulations Reference Guide contains information that will help you comply with Federal laws and regulations governing the manufacture, importation and distribution of firearms and ammunition. This edition contains new and amended statutes enacted since publication of the 2005 edition, as well as updated regulations and rulings issued by ATF. In addition to these updated materials, in response to inquiries received from industry members, the public, and partner agencies, the 2014 edition contains additional and amended Questions and Answers to assist with compliance," ATF Director B. Todd Jones states in the 2014 edition of the new Regulation Guide (emphasis mine). "Laws may change over time, as will information in this guide."

The Office of Management and Budget must review and approve ATF Regulation Guides, which again, come out approximately every 10 years. This can take months and changes to Regulation Guides are not easily or often made. Because of the lengthy amount of time it takes for OMB to approve a new ATF Regulation Guide, ATF's comment period is just for show. ATF officials and the White House have (and never did) no interest in actually listening to or considering comments that are currently being submitted.

Yet, ATF said it was a publishing error, and green tip ammunition wasn’t banned. A little over one year since this fiasco, society remains stable as millions of Americans prepare their tax returns for April (via NRA-ILA):

How the proposed ban played out was chronicled extensively in NRA-ILA Grassroots Alerts from February 13 through March 13, 2015. Suffice it to say now that the ban was opposed by law enforcement experts, 238 members of the U.S. House of Representatives, 53 U.S. senators, 80,000 Americans who submitted comments to ATF, and the NRA. And in the end, the ban was shelved.

And the result? The same that followed gun control supporters’ prediction, during the 1970s and 1980s, that crime would rise unless handguns were banned. And the same prediction, beginning in 1987, when there were 10 Right-to-Carry (RTC) states, that RTC laws would cause crime to rise. And the same prediction, beginning in 1989, relative to banning some or all semi-automatic firearms and magazines that hold more than 10 rounds of ammunition.

And as for M855, well, when was the last time you heard anyone in the law enforcement field mention it?

Anti-gunners being completely and utterly wrong about Second Amendment issues–it must be a day that ends in “y.”