Schadenfreude? Not Everyone In Socialist America Is Feeling the Bern–Some Want Him to Fail 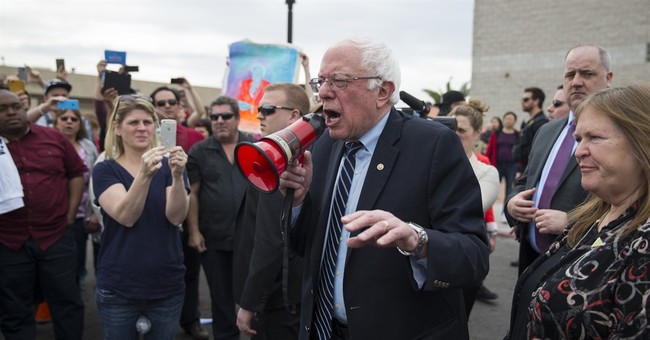 Young liberals may be “feeling the Bern,” but socialist America is somewhat split. Some may like that the disheveled, self-described democratic socialist is doing much better than expected against the Clinton political machine­, while others are skeptical of Sanders’ left wing bona fides. No, seriously folks–some on the far left think that Sanders is a Socialist In Name Only (SINO). Bill Scher wrote in Politico earlier this month about this debate within the fringe region of American politics. The socialist wing of the country is hoping to get five percent of the national vote this year so they can qualify for federal campaign funds for 2020. That task becomes astronomically harder when support from the hard left drifts to Sanders rather than candidates from the Green Party and others:

Philip Locker, Seattle-based spokesman for the national Socialist Alternative organization, is thrilled by Sanders phenomenon, enthusing that “the political system is starting to be shaken” as Sanders “is popularizing socialism to an audience of tens of millions.”

To others, that’s dangerous naiveté. Howie Hawkins, a Green Party co-founder and member of the socialist group Solidarity, wrote an essay in May for the ISO’s Socialist Worker website attacking Sanders for “violating the first principle of socialist politics: class independence,” consorting with the “billionaire class” by pledging to “support their candidate” if he loses the Democratic primary.

The largest and most established party in the socialist spectrum doesn’t have “socialist” in the name at all: It’s the Green Party, with approximately 100 municipal office holders across the country, most concentrated in California. The hardy leftists haven’t made much national noise since its presidential candidate Ralph Nader sent the 2000 election into overtime. This year, party leaders are banking on Bernie to create an unparalleled recruitment opportunity –as soon as he loses.

In many ways the split is most acute around the Green Party. Its likely nominee will be party veteran Dr. Jill Stein, who also led the ticket in 2012 and earned just under a half-million votes, the best Green Party tally since 2000. Though the biggest candidate on the far left, Stein still faces the daunting challenge of ballot access. A Green presidential candidate has never been on the ballot in all 50 states (in 2000, Nader appeared in 43). Approximating that goal is essential to mitigating concerns about wasted votes, and in 2012 Stein only reached 36, not counting the District of Columbia. According to a Green Party statement, it starts this year with only 22 in hand.

Here’s where the Sanders campaign begins to tactically divide the election-minded socialist left. Greens want socialists to put all of their energy into getting Stein on as many state ballots as possible, starting now.

But socialist groups that don’t field their own presidential candidates, such as Socialist Alternative and the Democratic Socialists of America, are ecstatic about a candidate who is mainstreaming the “socialist” label. They want to ride the Sanders train for as long as possible, though their objectives and tactics differ.

Lacking complete unity on the farthest left flank, Stein sees a huge bounty just around the corner in the form of soon-to-be disgruntled Sanders voters. She is careful not to seem like she is breaking out the popcorn as he suffers the digs and jabs from the Clinton behemoth, genially “wishing” her nominal rival, “all the luck in the world.” But she fully expects him to lose. And when he does, she plans to “let this be a learning experience, the teachable moment” for Sanders backers, so they will discover that “political revolutions that start in the Democratic Party, unfortunately, they die in the Democratic Party.”

So, the theme of division within this 2016 election cycle seems to have manifested itself in socialists as well. Republicans have the conservative and establishment wings duking it out, with the establishment not knowing whom to back, as the race increasingly becomes a three-man bloodbath between Trump, Rubio, and Cruz. The Democrats have a vivacious and vocal left wing of the party, a new order, trying to overthrow the last vestiges of the Clinton imprint on Democratic politics and the old guard, which could culminate in this being the last chapter of the Clintons in American politics. And we have the socialists divided over how to get past the five percent threshold in order to secure federal election money. Yet, there seems to be more drama on the far left.