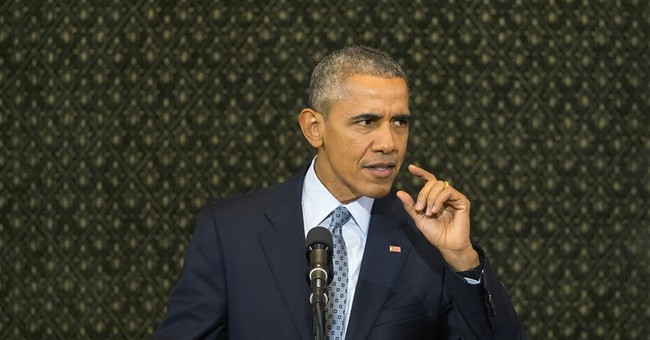 Today, President Obama ventured back to Springfield, Illinois, where he launched his 2008 presidential campaign, to address the Illinois General Assembly. He lamented about how he’s been an utter failure regarding bridging political divides and calming the vicious partisan rhetoric (via NBC News):

Returning to the place where his political career — and his first presidential campaign — began, President Obama visited the Illinois capital Wednesday, renewing his call for healing the nation's partisan discord and building a better electoral system.

Bemoaning a "poisonous political climate" that made citizens cynical and disillusioned and leaders unable to achieve great goals, Obama posed the challenge: "What can we do all of us together to try to make our politics better?"

He outlined a few solutions, none of them new: limiting the influence of money in politics — including a Constitutional amendment, if necessary; reforming the congressional redistricting process; and making it easier to register and vote.

Well, for starters, this president is the most divisive in the modern era. Second, gerrymandering really didn’t have that much of an impact on our political process. But if Democrats want to continue this charade of throwing temper tantrums about the way congressional districts are drafted, then win some state and local elections. You actually have to care about the states, Democrats. By all accounts, you have zero interest in state legislatures, secretaries of state, governors, insurance commissioners, and other positions that are key to congressional maps, and finding future talent for the party. But enough about how Democrats have been completely eaten alive at the state level; Obama added that not being able to shed his divisive nature is one of the biggest regrets of his presidency.

In short, a divisive president lamented about how awful he was at trying to…be not as partisan. That’s rich–almost as rich as Bill Clinton trying to accuse other of sexism given his sordid sexual history.

President Obama at Illinois General Assembly: "I had to acknowledge that one of my few regrets is my inability to reduce the polarization and meanness in our politics. I was able to be part of that here, and yet, couldn't translate it the way I wanted to into our politics in Washington." Full video here: http://cs.pn/1o2QFIq

But it’s been noted often by pundits that the tone of our politics hasn’t gotten better since I was inaugurated, in fact it’s gotten worse; that there’s still this yawning gap between the magnitude of our challenges and the smallness of our politics. Which is why, in my final State of the Union address, and in the one before that, I had to acknowledge that one of my few regrets is my inability to reduce the polarization and meanness in our politics. I was able to be part of that here and yet couldn’t translate it the way I wanted to into our politics in Washington.

And people ask me why I’ve devoted so much time to this topic. And I tell them it’s not just because I’m President, and the polarization and the gridlock are frustrating to me. The fact is we’ve gotten a heck of a lot done these past seven years, despite the gridlock. We saved the economy from a depression. We brought back an auto industry from the brink of collapse. We helped our businesses create 14 million new jobs over the past six years. We cut the unemployment rate from 10 percent to 4.9 percent. We covered nearly 18 million more Americans with health insurance. We ignited a clean energy revolution. We got bin Laden. We brought the vast majority of our troops home to their families. We got a lot done. We're still getting a lot done.

Right, Mr. Nonpartisan, who continue with this in his address:

I believe we’re judged by how we care for the poor and the vulnerable. I believe that in order to live up to our ideals, we have to continually fight discrimination in all its forms. I believe in science, and the science behind things like climate change, and that a transition to cleaner sources of energy will help preserve the planet for future generations.

I believe in a tough, smart foreign policy that says America will never hesitate to protect our people and our allies, but that we should use every element of our power and never rush to war.

Those are the things I believe. But here’s the point I want to make. I believe that there are a lot of Republicans who share many of these same values, even though they may disagree with me on the means to achieve them. I think sometimes my Republican colleagues make constructive points about outdated regulations that may need to be changed, or programs that even though well-intended, didn't always work the way they were supposed to.

So, you whip the Illinois Democrats into a frenzy, only to give the token handout to the GOP that we’re good at finding regulations that are outdated–and you're regretting how you have been unable to be less partisan? Get out of here, dude.

Full video here:
Trump Has An Idea on Who Should Run for Governor of Wisconsin
Rebecca Downs
Democrats Have Some Really Bad News for Fierce Trump Critic Adam Kinzinger
Rebecca Downs
President Joe Biden May Not Be Able to Escape This Major Crisis Before the Midterms