First Exits: Independent Voters Break For The Democrats, Could Spell Trouble For Hillary 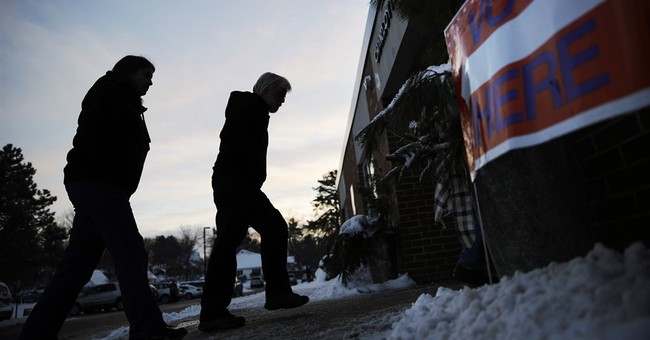 The first exit polls are out, and most Republican voters were undecided until a few days ago. Moreover, the most recent GOP debates proved to be a very important factor for New Hampshire voters as well. Around a quarter of Democrats came to their decision within the last few days (via CNN):

Republican voters expressed deep worries about both the economy (three-quarters were very worried) and the threat of terrorism (6-in-10 very worried). About 9-in-10 said they were dissatisfied with the federal government, including about 4-in-10 who were angry about the way it was working. And for many, the dissatisfaction extends to the GOP itself. Half said they felt betrayed by politicians from the Republican Party, and about the same share said they wanted the next president to be from outside the political establishment.

Though Democrats voting on Tuesday were less apt to say they felt betrayed by their party or to express anger with the federal government, about three-quarters said they were worried about the economy. About 4-in-10 said they thought life for the next generation of Americans would be worse than life today, and 9-in-10 said they thought the nation's economy favored the wealthy.

Still, Democrats who went to the polls Tuesday -- to vote in a race featuring two seasoned politicians -- were more apt than Republicans to say they wanted the next president to have experience in politics, only about one-quarter said they preferred a president from outside the political establishment.

Only about one-quarter of Democrats said they made up their minds in the final days of the contest, well below the share of Republicans deciding late.

CNN’s political director David Chalian added that regarding independent voters, who make up the majority of registered voters in New Hampshire–they’re making up more of the electorate in the Democratic primary than the Republicans (41/35).

John King added that when it’s Sen. Bernie Sanders vs. Hillary Clinton with registered Democrats, it’s a close race. Sen. Sanders begins to pull ahead when independents are added into the mix.

Parting thought: Things could change, as New Hampshire polling isn’t the most accurate (via WaPo):

The truth is that New Hampshire primary polls are frequently wrong in predicting not only the margins of victory but also the winners.

• In 1980, a CBS poll showed Ronald Reagan beating George H.W. Bush by 45 points, though his actual margin of victory was 27 points.

• In 1984, the final Washington Post-ABC News poll had Walter Mondale tied with Gary Hart, and the final CNN poll had Mondale winning by six points. Hart won by nine.

• In 1988, Gallup had Bob Dole beating George H.W. Bush by eight points, and the Post-ABC poll had Dole up by three. Bush won by nine.

• In 1996, CNN-Time showed Dole winning by 15 points. Patrick Buchanan won by one point.

• In 2000, the average of all polls showed John McCain beating George W. Bush by eight points. McCain won by 18 points, more than twice what polls predicted. Though this was a larger average error than in 2008, it was not labeled a “fiasco.”

Why are polls often wrong? It’s not usually because of methodological issues but because of timing. When pollsters conclude their interviews (some by Friday, others as late as Sunday), many voters have not made up their minds. Exit polls show that 30 to 45 percent of voters make their decisions in the final three days of the campaign; 15 to 20 percent do so on Election Day itself.

UPDATE: GOP voters split between wanting an "outsider" over an establishment candidate.