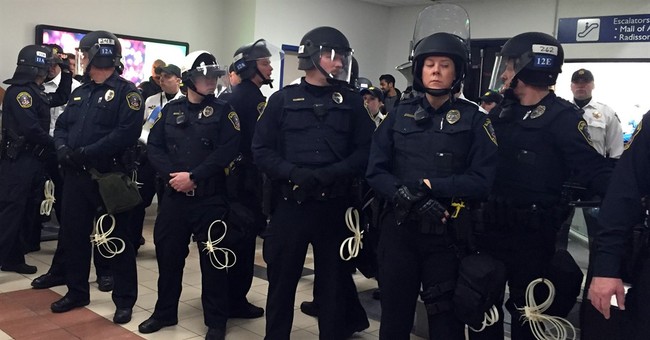 With no charges being filed against the Cleveland officers involved in the shooting death of Tamir Rice, you can be assured that the Black Lives Matter movement will continue their activism into the 2016 season. This incident, the police-involved shooting death of Michael Brown in Ferguson, Missouri, and the controversial arrest and death of Freddie Gray in Baltimore, took a toll on law enforcement. In June, a Gallup poll showed that confidence in police had reached a 22-year low. Now, the polling company is saying that there has been a “tenuous” recovery:

After dipping to 48% in 2014 amid a national firestorm over police treatment of young black men, the rating Americans give the honesty and ethical standards of police has rebounded to 56%. This is more consistent with the 54% to 58% ratings Gallup found between 2010 and 2013.

Four in 10 nonwhites now rate the ethical standards of police as very high or high -- a sharp increase from the 23% who held this view in 2014. A steep drop in nonwhites' ratings of the police in 2014 was the sole cause of the profession's overall ratings dip last year.

The overall image of the police is largely restored to what it was before incidents in Ferguson and elsewhere in 2014 spawned the "Black Lives Matter" movement against police behavior. However, it is a tenuous recovery as the police's rating among nonwhites is still not fully repaired.