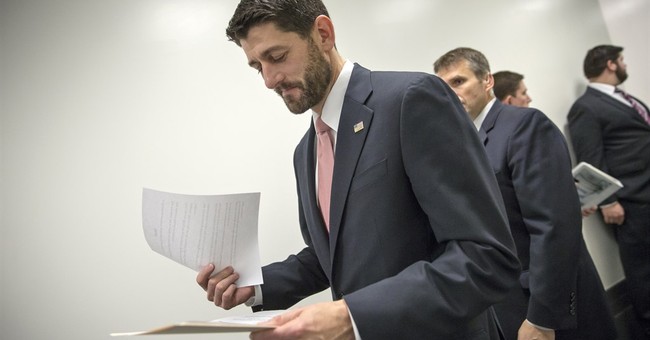 Before the holidays, the Senate passed a reconciliation bill that guts key portions of Obamacare and defunds Planned Parenthood for a year. The use of the legislative tactic was discussed during the 2015 GOP Retreat in Hershey, PA last January. The Republican leadership finally got their act together and began drafting a bill by the fall of 2015; Sen. Mitch McConnell (R-KY) promising the Senate would take up the measure as soon as it passes the House. This piece of budget reconciliation legislation, which only requires a simple majority to pass, easily cruised through the House (240-189), and went onto the Senate, where they did pass it by a 52-47 vote. The Senate version was different, so now it goes back to House, where this business is set to be settled as soon as members of Congress return from their holiday break (via The Hill):

Republican leaders are planning to vote on a House bill to dismantle core pieces of ObamaCare in the lawmakers’ first week back in 2016.

The House Rules Committee announced Wednesday that it will take up a bill repealing ObamaCare mandates and taxes on Tuesday, Jan. 5 — the chamber’s first day back from a monthlong holiday recess.

The vote on the legislation, which has already passed the Senate, will set up a veto battle with the White House just ahead of President Obama's State of the Union address on Jan 12.

After the bill’s passage, which could take place as early as Jan. 6, Obama would have 10 days to veto the bill. Lawmakers would then take a vote to override the president's veto, a vote that is doomed to fail.

Speaker Paul Ryan (R-Wis.) had already said that a vote to roll back ObamaCare would be a top priority in 2016 and has pledged to unveil a long-awaited replacement plan sometime next year.

Of course, Obama is going to veto the measure, and as the Hill mentioned–the GOP doesn’t have the votes to override it. Nevertheless, this is something the GOP promised its voters, and it will be a piece of legislation that actually makes it to the president’s desk, unlike the 50+ other repeal votes they’ve set up over the past few years. The fact that it will make it out of Congress makes it a symbolic victory, which probably won’t satisfy the Tea Party wing of the party. But, alas, this is what happens when your party doesn’t occupy the Oval Office.