Confirmed: Obama Is The Best ‘Gun Salesman Of The Decade’ 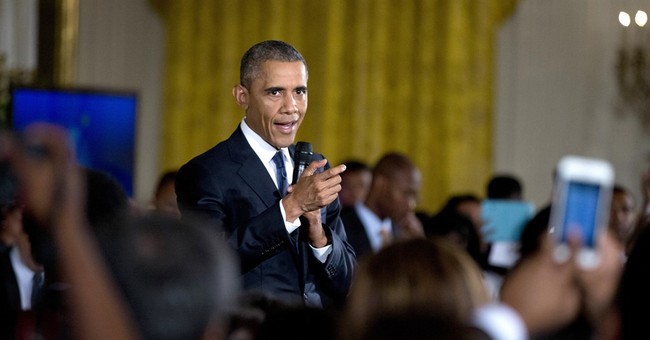 The fallout from attempted ammo bans for AR-15 rifles to dead on arrival gun control initiatives in Congress, which would do next to nothing to curb future mass shootings (or gun violence), has led to President Barack Obama becoming one of the greatest gun salesman of all time. Okay. That’s a bit of an exaggeration, but he’s certainly one of the best in the past decade (via the Hill):

Gun production has more than doubled over the course of the Obama administration, according to a new report from the Bureau of Alcohol, Tobacco, Firearms and Explosives.

“The ATF report confirms what we already know, that Barack Obama deserves the 'Gun Salesman of the Decade' award,” said Erich Pratt, spokesman for the Gun Owners of America. "People have been rushing to buy firearms because they’re afraid that Obama will take away their Second Amendment rights.”

The ATF’s annual firearms commerce report tracks the number of guns manufactured in the United States, which provides an indication of gun sales around the country.

The number of guns manufactured increased by 18 percent during the George W. Bush administration, while the Clinton administration actually saw a 9 percent reduction.

But under President Obama, gun production has spiked 140 percent to 10.8 million firearms in 2013, the most recent year for which data is available.

Pistols are the most popular type of gun, accounting for 4.4 million of the firearms made in 2013, according to the report. Meanwhile, gun manufacturers produced 3.9 million rifles and 1.2 million shotguns.

The number of pistols made has nearly tripled during the Obama administration, which could also reflect more people turning to firearms for personal protection, Pratt suggested.

After the horrific shooting in Newtown in 2012, gun control was a top item for the Obama administration. Fresh off their 2012 victory over Mitt Romney, Obama decided to waste the most precious moments of his second term by engaging in gun politics. It’s a moment that conservatives both fear and love. They fear that liberals might succeed in passing some form of gun control legislation, hence why ammo and gun sales spike. At the same time, it’s an issue that divides the Democratic Party, and they’ve pretty much lost every single debate on this issue since 1994.

The federal assault weapons ban was one of the reasons that led to the Democratic shellacking of 1994. Democratic Speaker of the House Tom Foley became the first speaker to be defeated for re-election since Galusha A. Grow in 1862. In 2000, Al Gore could have won Arkansas, West Virginia, and Tennessee if he didn’t partake in the unnecessary exercise of trying to out-gun control his primary opponent Sen. Bill Bradley (D-NJ). If Gore had won those states, he still would have clinched the presidency, even with Bush winning Florida. Democrats remained silent on the issue until 2012, and they lost again. The Manchin-Toomey gun control bill to unnecessarily expand background checks (federal firearms licensed dealers are already mandated by law to perform them for all purchases) went down in the Senate.

In a recent Pew Research  survey, Republicans are viewed as better in handling the gun control issue, though neither party holds the cards on the economy. Yet, the favorability ratings for both parties are down. Democrats are evenly split–48 favorable, 47 unfavorable–while 32 percent view the Grand Old Party favorably, with a dismal 60 percent unfavorable rating. This could be due to the fact that Republicans are not really happy with their party:

Republicans, in particular, are now more critical of their own party than they were a few months ago. About two-thirds (68%) express a favorable opinion of their party, the lowest share in more than two years. Six months ago, 86% of Republicans viewed the GOP positively.

The current survey finds that positive views of the GOP among Republicans have declined 18 percentage points since January, from 86% to 68%. Independents also view the Republican Party less favorably; 29% today, compared with 37% six months ago.

Democrats, by contrast, continue to express highly positive opinions of their party: 86% view the party favorably, little changed from 84% in January. Independents’ views of the Democratic Party also are unchanged since January, at 38%.

No, Donald Trump will not improve these numbers. His unfavorables are the worst in the 2016 field in the must-win states of Virginia, Colorado, and Iowa. Yet, I digress–let’s raise a glass to Barack Obama, whose policies indirectly led to more Americans buying firearms, which, in turn, makes the nation safer.