No, 10,000 Children Aren't Killed Or Injured By Guns Every Year 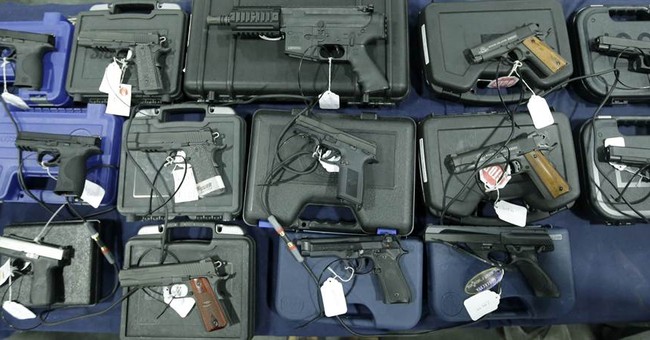 Our sister site Twitchy posted about this pro-gun control tidbit from CNN’s Sally Kohn, where she wrote that guns kill or injure 10,000 kids a year, according to the American Academy of Pediatrics. In all, she was trying to say that given these figures, shouldn’t we regulate firearms in the same fashion as we do cars and children’s toys?

Recently, my CNN colleague Mel Robbins made a startling point. Robbins was on "Legal View" to discuss the case of an 11-year-old who shot and killed an 8-year-old neighbor when host Ashleigh Banfield noted that 10,000 children are killed or injured by guns every year.

…10,000 kids die or get injured because of guns every single year and we can't pass even the most measly common sense safety laws?

For sure, there's no Second Amendment right to Easy-Bake Ovens. But the Second Amendment doesn't mean we have to hand out guns like candy without reasonable safety precautions and regulations.

Even conservative Supreme Court Justice Antonin Scalia says, regarding guns and the Second Amendment, "There are some limitations that can be imposed." And simple measures like requiring universal background checks and restricting semi-automatic weapons and high-capacity magazines are supported not only by a majority of Americans but a majority of gun owners.

Oh, where to begin with this piece? For starters, we don’t give out guns “like candy.” Legal gun owners go to dealers who have federal firearms licenses, which means they’re required by law to conduct a background check for all purchases. The same applies for online sales as well. In that scenario, you still have to go through a background check. You may be able to buy the gun online, but you have to ship by a local FFL dealer so they can run the check before you leave with your firearm. The majority of states already incorporate mental health records into the National Instant Background Check System (NICS), and that’s a provision that should be expanded. The problem is that Democrats and anti-gun progressives don’t want to have a serious debate about mental health in this country.

So, unless you want to buy a gun illegally from the trunk of someone’s car, which is also incredibly shady, then go right ahead, but if you’re caught–you should be prosecuted to the fullest extent of the law.

Second, Kohn seems to have followed into the trap, like most in her circle, about gun definitions, which is why I’m suspect on any poll showing support for new gun control laws–specifically those that call for bans on semi-automatic firearms. Again, semi-automatic means self-reloading, and discharges one round per trigger pull. Millions of these firearms are in circulation. Millions of Americans own them. And they’re readily available. Fully-automatic firearms are legal for civilian use, but you’ll have to go through the ATF, pass a background check process that could take up to a year, maybe longer, and your name gets added into a federal database.

A ban on semi-automatic firearms is a gun ban. Period. And they’re not popular, given that support for a handgun ban, which is a semi-automatic weapon system, is near a record low.

So, what is Kohn saying when she writes, “restricting semi-automatic weapons”? Is this just a soft way of saying she’s on the gun confiscation bandwagon Hillary Clinton seems to be channeling, along with some editors (and writers) at the Washington Post? It wouldn’t surprise me, nor does it shock me that liberals find terms like "semi-automatic" and "AR-15" scary. Fun fact: a hunting rifle packs more power than a round fired from an AR-15 rifle. And rifles and shotguns are rarely used in crimes, but you knew that already.

As for the 10,000 kids are killed or injured claim, it’s quite the digestif, given the president’s ludicrous figure on gun deaths which he included in his address the International Association of Chiefs of Police in Chicago on Tuesday. He said that 400,00 people have been shot or killed since 9/11. Of course, the president included suicides to inflate the numbers.

With this 10,000 kids figure, the 2014 study claimed that 7,000 kids are injured with gunshot wounds, with an additional 3,000 dying before they can make it into the emergency room; that point was repeated on Think Progress, NBC News, and MSNBC.

The new study “highlights the critical effect that firearms are having on children’s health and safety,” said Patrick Tolan, a professor of education and psychiatry at the University of Virginia and director of the Youth-Nex, the U. Va. Center for Positive Youth Development. “It’s clear that this needs to be a part of the conversation about firearms. There’s been such a strong focus on whether somebody’s liberty might be fettered.”

The high number of accidental injuries, especially in the youngest children, underscores the need for parents to keep guns locked in a safe place that is separate from where ammunition is stowed and secured, Leventhal said.

If you look at homicide as a function of age, you’ll see that there is a peak between 18 and 20, Webster said. “So for this very high risk group of 18- to 20-year olds, we think it’s too dangerous to drink beer, but in 45 states they can legally possess as many handguns as they like.

“We have weak laws, and for that we pay a dear cost.”

Well, that last remark certainly captures the bias within the sciences concerning firearms, but let’s go through the figures because I’m sure you’re not the only ones thinking these are way off. John Cardillo, a Blaze contributor, noted that there were only 1,085 homicides in the under 18-age group, according to the FBI’s figures on murder victims from 2014. There were also 8,124 total murders committed by firearms last year, which constituted a 3.9 percent reduction from 2013’s figures.

Concerning safety, the National Shooting Sports Foundation using data from the National Safety Council found that in the last decade, “the number of unintentional firearm-related fatalities involving children 14 years of age and under has decreased by 28 percent and by 74 percent over the last 20 years.” They also added that firearms are less than 1.5 percent of all unintentional fatalities among children under the age of 14. Between 1991-2011, the number of fatalities from firearms within the home dropped 50 percent. By 2011, unintentional deaths from firearms at home constituted less than one percent of all fatalities.

Of course, we should be doing everything to emphasize gun safety. It’s a cornerstone of the National Rifle Association. Expanding background checks in their current form won’t stop mass shootings; Oregon showed us that. Laws that only impact the law-abiding won’t impact gun violence. Violent crime is down, gun homicides/deaths are down, and yet the left still thinks America is a shooting gallery. Guns are regulated in the United States. And if the anti-gun left wants* to move the needle on this issue, they could start by quitting peddling unadulterated crap when it comes to facts and figures about gun politics.

Last Note: The leading cause of accidental deaths among children under five is drowning.

*I mean, they’ll try and most likely fail…again.