As Russia Begins Syrian Air Campaign, US Has 'Grave Concerns' 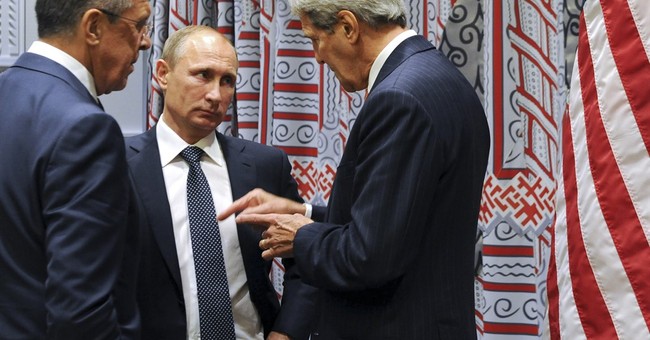 Yesterday President Obama and Russian President Vladimir Putin formally met for the first time in two years at the United Nations. While it got off to an awkward start, but the scheduled hour meeting went on for about 90 minutes, according to NBC News. Putin said both countries had disagreements regarding Syria, but there was a lot of room where the two men found common ground, namely defeating the Islamic State. Then again, there’s some disagreement on that front, as the Russians see besieged Syrian President Bashar al-Assad as a critical player in defeating ISIS in the country. The United States views the authoritarian president as a “tyrant,” who possibly used nerve gas against his own people in the summer of 2013, with chemical weapons inspectors inside the country. Now, with approval from the Russian Federation Council, Putin has begun an air campaign in Syria, which has raised the eyebrows of U.S. officials (via NYT):

President Vladimir V. Putin of Russia suddenly escalated the stakes in his contest with the West over influence in the Middle East on Wednesday, as Russian pilots carried out their first airstrikes in Syria.

Russian warplanes and helicopter gunships dropped bombs north of the central city of Homs hours after Mr. Putin pushed a measure through the upper house of Parliament approving the use of Russian military forces abroad. Russian officials and analysts portrayed the move as an attempt both to fight Islamic State militants and to try to ensure the survival of President Bashar al-Assad of Syria, Moscow’s main ally in the Middle East.

“The only right way to fight international terrorism — and it is gangs of international terrorists that are fighting in Syria and in neighboring countries — is to act preventively, to fight and destroy militants and terrorists on the territories that they already occupied, not wait for them to come to our house,” Mr. Putin said at a meeting of government officials on Wednesday, in remarks broadcast on state television.

"These strikes will continue,” he said.

Kerry added that the concerns the United States has is that Russia might not be striking only ISIS targets in Syria (via Fox News):

Kerry has also admitted this week that the Obama administration’s utter failure to make good on their various red lines they drew in Syria may have impacted our perception to our allies abroad (via RCP):