Hillary, It Didn’t Have To Be This Way

Hillary, it didn’t have to be this way: that’s probably what a lot of her supporters and advisers think about her current email fiasco, which much to her campaign’s annoyance, hasn’t gone away–and it shouldn’t. Since her majesty turned over her private server to the Justice Department, there have been over 300 emails flagged for further review. Yes, some of them contained classified information, and there are allegations that someone removed the “classified” markers. That’s a felony. Oh, and did I mention that the IT service that managed the private email system wasn’t cleared by the State Department? Yeah, and the servers were housed in a bathroom closet. The campaign walked into the propeller again when Jennifer Palmieri, Clinton’s communications director, said, “she didn't really think it through,” concerning the former Secretary of State having a private email system.

Yet, this all happened. Nothing can be done about it–and now Republicans have a scandal that provides plenty of campaign ammunition. This trainwreck plays upon the worst characteristics (secrecy, playing by their own rules, lack of transparency, and trust) the public see in the Clintons. Jill Lawrence of U.S. News and World Report wrote in The Week that this whole saga has torpedoed Clinton’s chances of running a smooth campaign. Moreover, she agrees with Rep. Trey Gowdy (R-SC) that this certainly deserves a thorough analysis:

Think about the conversation that must have happened when she joined the State Department. She tells her advisers and staff: I'm not going to open an official secretary of state email account. I'd prefer a personal account on my own private server with my own security so I can, you know, carry one device and have my emails on yoga and affairs of state and Chelsea's wedding all together.

There are two ways things could have gone from there.

2. Advisers and staff: Terrible idea, don't do it. You're going to be dealing with sensitive, even classified information on a regular basis and some of it is bound to get onto your non-government server, even if you're not the one who sent the initial email. There are security risks. There is also the potential for political risks right when you would be launching your presidential campaign. If there's a breach on your government account, you're not responsible. A breach on this account or even inadvertent mishandling of this information, and it's all on you. Clinton: I'm going to do it anyway.

And so a classic Clinton Beltway drama unfolds in inevitable fashion: stalling, surprises, investigations, retreat to the bunker, charges of partisan mud-slinging, a drip-drip of damaging information, and the nerve-wracking prospect of Clinton testifying on Oct. 22 before a GOP panel investigating the 2012 killings of four Americans at the U.S. mission in Benghazi, Libya.

Rep. Trey Gowdy (R-S.C.), the former federal prosecutor who heads that committee, calls Clinton's email arrangement unusual, unique, unprecedented, and worse. "It was one of the most reckless decisions that have been made in public service in a long time," he said on Fox News Sunday. "And the notion that she did this for convenience … convenience for whom? 'Cause it sure hasn't been convenient for the American people or for our intelligence apparatus. It may have been convenient for her, but it hasn't been convenient for anyone else." The decision, he said, has delayed his panel's work to compile a complete public record and "it remains to be seen whether or not she's placed national security information at risk."

Would anyone like to argue with Gowdy? I doubt he and I would agree on much, but on this, alas, there is no daylight between us.

To make matters worse, you have Bob Woodward saying how this development reminds him on the Nixon Tapes (via Inside Sources):

Follow the trail here,” Woodward said on MSNBC’s “Morning Joe.” “There are all these emails. Well, they were sent to someone or someone sent them to her. So, if things have been erased here, there’s a way to go back to these emails or who received them from Hillary Clinton.”

“So, you’ve got a massive amount of data in a way, reminds me of the Nixon tapes — thousands of hours of secretly recorded conversations that Nixon thought were exclusively his.”

The Washington Post’s David Ignatius agreed with his colleague Eugene Robinson that this is a “self-inflicted wound," and that Clinton has no one but herself to blame. He also mentioned how former CIA Director David Petraeus pled guilty to mishandling classified material that stemmed from his extramarital affair with Paula Broadwell. Yet, more damagingly, were Ignatius’ remarks regarding the supposed removal of classified markers, which he said (always) made the intelligence community nervous about the Clintons since “they seem to play by different rules.” The people who handle national security information have stringent protocols regarding this information, and the Clintons have shown “disrespect” for that process.

Hillary’s disaster of a press conference after her first campaign event in Nevada exemplified that point. There, Fox News’ Ed Henry pressed her about wiping her server clean, which the FBI said was attempted at least once. The exchange between Henry and Clinton grew testy, with the latter flippantly saying, “like with a cloth or something.”

Ignatius added that if Hillary apologizes for this massive error in judgment, maybe she could get beyond this but let’s not bank on that happening anytime soon. Moreover, she "thrives” on the attacks, as noted by Jennifer “Clinton ‘didn’t think it through’” Palmieri (via Politico):

“I think when you get to the point where you’re answering questions about wiping servers that you’re nearing the end of legitimate questions for her to answer,” Jennifer Palmieri told MSNBC’s Luke Russert, remarking that the campaign is focused on “educating” voters about the complexities surrounding the issue.

Clinton is “durable,” Palmieri said. “You cannot knock her down. She’s been through months and months of pretty much 19 candidates on both sides attacking her every day, and she thrives.”

“We’re confident that there’s not anything in those emails that we’re extremely concerned about, and we’ll get through that process, hopefully by January, that’s when they’ll be done with it, and people can judge for themselves. But we’re very confident when that all is seen, people will see what she did as secretary of state and feel good about it,” Palmieri said.

Repeating the campaign line that the investigation of Clinton’s emails has turned political, Palmieri said that Clinton has “been through a lot of battles.”

The last point does throw some cold water regarding this FBI probe into her email.  The New York Times' Ross Douthat alluded to this as well:

While the email scandal is a serious business, I simply do not believe that the Obama Justice Department is going to indict the former secretary of state and Democratic front-runner for mishandling classified information, even if the offenses involved would have sunk a lesser figure’s career or landed her in jail.

And to continue to wax cynical, I think it would take an indictment of Herself, not merely an investigation that ultimately finds a fall guy in Clinton’s IT team or even among her intimates, to turn Democratic primary voters against Hillary or force her from the race.

The Clintons are the “penicillin-resistant Syphilis of American politics.” It's possible that all of this could blow over, though I think some on Team Clinton–and the media–thought this story would already have maggots on it by now–wrong.

As email/server story continues, a reminder that GOP hasn't even begun the "Clinton foundation" stories/attacks

Yet, the parting thought is that while this email catastrophe is still dominating the news cycle, we still have yet to comb through the dealings of the Clinton Foundation; another potential source of Clinton intrigue that should be next on the docket. 2016 is a long ways away. We certainly have time.

So, yes, Hillary, it didn’t have to be this way regarding your email server, but who are we to stop Democrats, liberals, and progressives from falling on their own sword, especially during an election year. 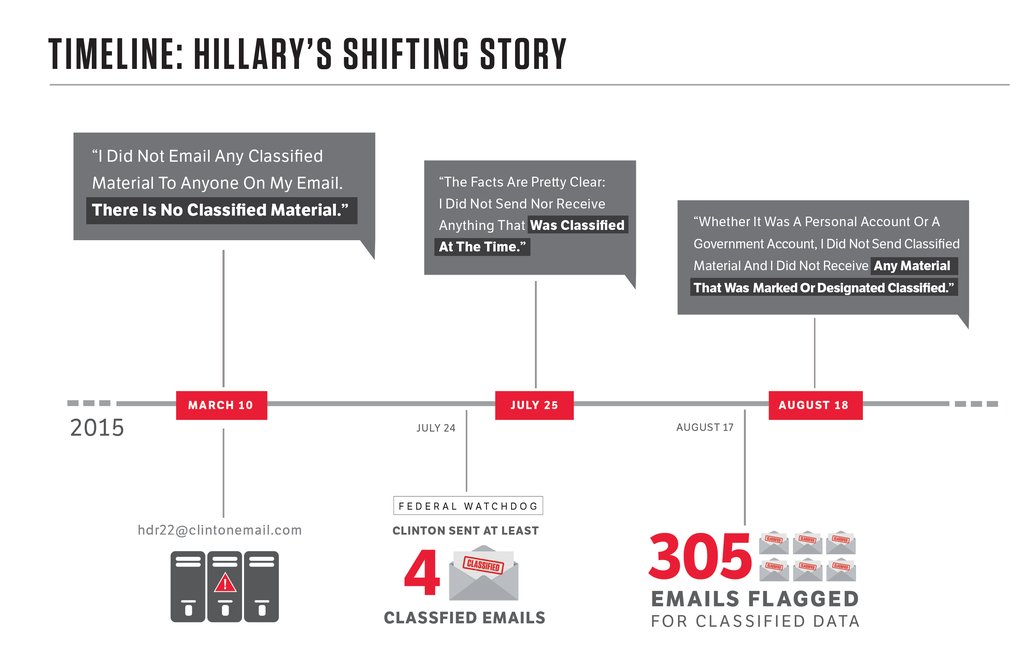