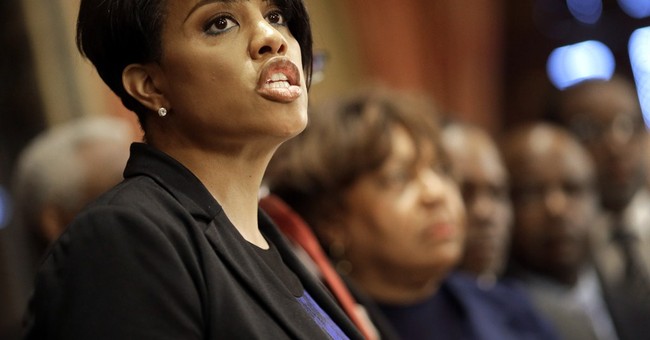 On April 25, as the White House Correspondents' Dinner moved on in Washington, some protests over the death of Freddie Gray devolved into vandalism in Baltimore; Gray died in police custody earlier this month. He suffered severe spinal injuries and did not receive immediate medical attention. It was also reported that he was not securely fastened by a seatbelt when he was being transported on April 12–the day of his arrest–after being pursued by police. That goes against department policy. Following his arrest, the circumstances that led to his death are still riddled in mystery. The Baltimore Sun reported that the timeline for when the van stopped remains “incomplete.” Moreover, some of the residents’ testimony “conflicted with the official version of events, including a police account the Gray’s arrest was made ‘without force of incident.’”

These images courtesy of The New York Times

The Sun also reported that police “missed the opportunity” to examine some evidence that could shed light into this matter; this includes security camera footage at “a key intersection” that had already taped over. Regardless, some riots and vandalism broke out on April 25, which forced Camden Yards to be temporarily locked down due to safety concerns.

It was at an April 26 press conference­–the day after the first wave of protests and vandalism–which Baltimore Mayor Stephanie Rawlings-Blake instructed the police [emphasis mine]:

To do everything that they could to make sure that the protestors were able to exercise their right to free speech It's a very delicate balancing act because while we try to make sure that they were protected from the cars and the other things that were going on, we also gave those who wished to destroy space to do that as well, and we work very hard to keep that balance and to put ourselves in the best position to de-escalate."

I want to clarify—I did not instruct police to give space to protesters who were seeking to create violence or destruction of property.

Taken in context, I explained that, in giving peaceful demonstrators room to share their message, unfortunately, those who were seeking to incite violence also had space to operate. And we worked very hard to put ourselves in the best position to deescalate those instances.

Last night, as the city descended into chaos, she told the media “I never said, nor would I ever say, that we are giving people space to destroy our city, so my words should not be twisted.”  The latest wave of rioting has been the most destructive thus far since the Gray incident. It began around 3pm yesterday afternoon.

This image courtesy of The New York Times

Maryland Gov. Larry Hogan declared a state of emergency last night, and the National Guard has been deployed to the city.

Mayor Rawlings-Blake also drew some criticism for calling the rioters “thugs,” sparking accusations of racism, according to NBC:

"It is idiotic to think that by destroying your city, you're going to make life better for anybody… Too many people have spent generations building up this city for it to be destroyed by thugs who, in a very senseless way, are trying to tear down what so many have fought for."

I'll let you decide if the mayor was in the wrong, or if her words are being twisted by the media.

Right now, Gov. Hogan stated that there will be 2,000 National Guardsmen and over 1,000 police officers on duty to enforce tonight's curfew at 10pm, and make sure no more looting, vandalism, or violence continues within the city.

Thanks again to all our law enforcement and fire officials, emergency management personnel, and National Guard for working around the clock.

It took 27 days for CNN to say what they previously accused Trump of lying about
Hotair
Two Fateful Events Occurred on January 15 Which Changed America for Years to Come; One Glaring, the Other Quiet
Redstate