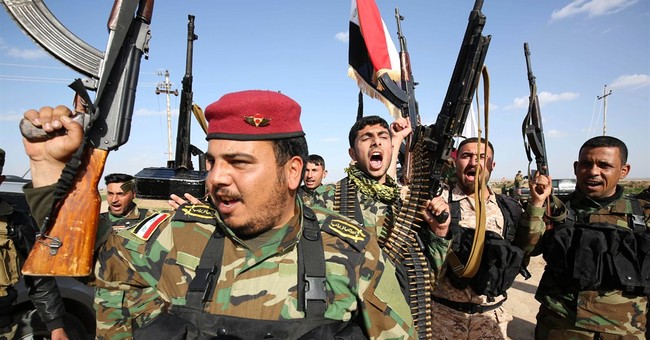 Three Shiite militias have decided to stop fighting in Iraq, depriving the Iraqi government of thousands of able-bodied fighters in their struggle against the Islamic State. They’re citing American airstrikes as the reason. It’s a trust issue (via NYT):

Three major Shiite militia groups pulled out of the fight for Tikrit on Thursday, immediately depriving the Iraqi government of thousands of their fighters on the ground even as American warplanes readied for an expected second day of airstrikes against the Islamic State there.

The militia groups, some of which until recently had Iranian advisers with them, pulled out of the Tikrit fight in protest of the American military airstrikes, which began late Wednesday night, insisting that the Americans were not needed to defeat the extremists in Tikrit.

Together the three groups represent as much as a third of the 30,000 fighters on the government side in the offensive against the Islamic State, which is also known as ISIS or ISIL, analysts said.

“We don’t trust the American-led coalition in combating ISIS,” said Naeem al-Uboudi, the spokesman for Asaib Ahl al-Haq, one of the three groups which said they would withdraw from the front line around Tikrit. “In the past they have targeted our security forces and dropped aid to ISIS by mistake,” he said.

One of the leaders of the biggest militias in the fight, the Badr Organization, also criticized the American role and said his group, too, might pull out. “We don’t need the American-led coalition to participate in Tikrit. Tikrit is an easy battle, we can win it ourselves,” said Mueen al-Kadhumi, who is one of the Shiite militia group’s top commanders. …

But a pullout by those militias, especially by the Badr Organization, would effectively disband the largest and most effective ground force the Iraqi government has been able to field since the invasion by ISIS last year.

American airstrikes began last night and lasted for about eight and a half hours before the Iraqi Air Force took over this morning.

In the meantime, ISIS has been able to siphon millions of dollars from the paychecks of Iraqi government workers in Mosul and Baghdad. In fact, the figures are in the tens of millions each month, which provides a nice stream of revenue for their various terrorist operations. As the Wall Street Journal reported, the situation has created a headache for the United States who must choose between two awful outcomes of trying to curb this money going into enemy hands. If they cut off the paychecks to workers in those areas where ISIS is skimming from the payroll, it could create a humanitarian crisis for hundreds of thousands of innocent Iraqis. If payments continue unmolested, ISIS will still be able to use the money to rearm, refortify, and launch new offensives. Either way, if nothing is done, ISIS has the potential of raking in hundreds of millions of dollars for their activities:

Islamic State militants are skimming tens of millions of dollars a month from salaries paid to Iraqi government employees in occupied areas such as Mosul, and Baghdad continues to send the cash to maintain local support.

The group is using the money to fund operations, U.S. officials say, underlining the delicate balancing act U.S. and Iraqi governments face in what they know is a hearts-and-minds campaign against Islamic State ahead of a military operation to retake Mosul, for which U.S. officials are training Iraqi troops.

“No decision has been made one way or another as to how the U.S. should engage on [the seized funds],” a senior Obama administration official said. “This is something we are concerned about and continue to look into, but this is a matter that the Iraqi government ultimately controls.”

Money couriers leave places like Mosul and go to Kurdistan or other areas to collect government payments for a large group of Iraqi employees who work in such Islamic State-controlled areas, U.S. officials say.

The courier system is necessary because the Iraqi government has banned money transfers to banks inside Islamic State-controlled territory.

The Financial Action Task Force, an international consortium of government officials focused on blocking illicit finance, issued a report in February estimating Islamic State’s practice of seizing a portion of government employee salaries in areas it controls could bring in hundreds of millions of U.S. dollars annually, citing “several U.S. contacts in Iraq” as the source for the figure. U.S. officials say there are varying estimates, making it hard to put a precise number on the transfers to Islamic State.

U.S. intelligence officials have tried to disrupt the group’s revenue stream since last summer, with some success, U.S. officials say.

Periodically, one person from an office or building will leave Mosul, travel to Kirkuk or another nearby area, collect the salaries of a number of others, and then bring the money back to Mosul, U.S. and Iraqi officials said.

Before the money can be distributed to the employees, Islamic State militants take their cut. For example, two Iraqi finance executives said employees would leave Mosul and travel to Kurdistan, receive salaries for numerous people in cash, and then return with the money, paying a portion to Islamic State upon re-entry.