The Evolution Of Walker: Time Magazine Tracked Down His Old High School Science Teacher For Answers 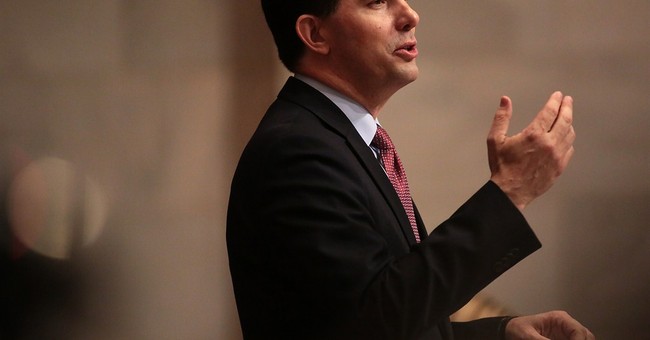 Wisconsin Gov. Scott Walker punted on a question about evolution in London–and it’s driving the liberal media insane. To them, this is a benchmark in the vetting process for the Presidency of the United States. It also will confirm their own bias about Walker leaving college in the spring semester of his senior year: he’s–for the lack of a better term– a country bumpkin.

Time magazine found Walker’s old science teacher–Ann Serpe–from high school to solve the evolution puzzle surrounding him. He was said to be accepting of all the lessons taught to him, according to Serpe (via Time):

Among those who questioned Walker: the chair of his high school science department, Ann Serpe, 73. “Answer the question when they ask you!” Serpe said in an interview. “He could have manned up a bit. That’s what I would tell him.”

Serpe, who taught chemistry and chaired the math and science department at Delavan-Darien High School in Delavan, Wis., before her retirement in 1998, now lives in nearby Elkhorn. She recalls that Walker, her pupil and an advisee in student government, was a bright, committed participant in class. Walker graduated in 1986.

What would Walker have learned in high school? “We taught the theory of evolution, and human evolution, as a prerequisite to understanding biological classification. I went out and looked at my biology textbook just to make sure.”

Serpe says, “I don’t know the dogma of the Baptist church where Scott’s father was the minister, as it concerns evolution. But I do recall that Scott was very accepting of everything in science class. He had a good sense of it.”

Walker’s onetime teacher has seen him a few times since his high-school days. She even attended one of Walker’s fundraisers in Milwaukee. Darwin, though, hasn’t come up in their conversations.

She says she hopes he—”as an intelligent young man”—would understand the importance of scientific thought, that evolution and creation are not mutually exclusive.

All I can say is that some news outlets are really obsessing over this evolution business that has little to do with someone's qualifications as president. There are so many more issues of importance that the next president needs to address; rehashing the Scopes Monkey Trial isn’t one of them–and Scott Walker, were he to become president, wouldn’t dabble with making the creationism-evolution debate his primary action item as the leader of the free world. It’s absurd. If the media is willing to ask old high school faculty about Walker, we should be prepared for more of this nonsense. And Walker should gear up to address and neutralize this line of attack. There may be no GOP nominee yet, but we can’t afford to have one who’s already been defined by the political left when we do have a candidate.