AFRICOM: We Need A Counterinsurgency Plan To Fight Boko Haram 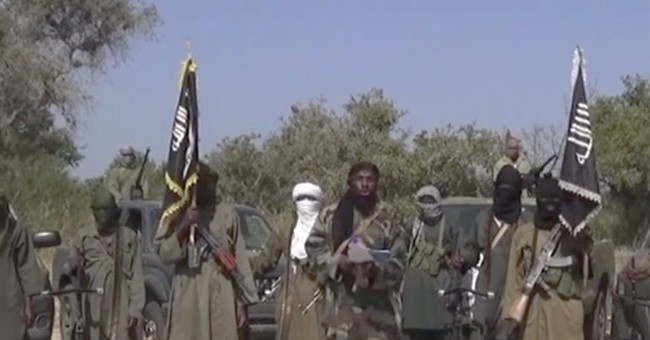 Boko Haram is out of control. On top of the many issues facing Nigeria, this Islamist insurgency that Nigerian government forces have been unable to neutralize, seem poised to create serious sociopolitical problems in the upcoming elections.

As Leah wrote today, when the current Christian president, Goodluck Jonathan, won in 2011 over the Muslim Mohammadu Buhari, nearly 1,000 churches were destroyed, hundreds were killed, and more than 3,100 Christian schools, businesses, and shops were burned. With Boko Haram added into the mix, such a a massacre repeating is more than possible.

Boko Haram–a five-year old insurgency–killed 10,000 people last year. Reports of this group wiping out whole villages have been documented, and they’ve forced thousands of Cameroonians living near the border of Nigeria’s Borno state. Right now, AFRICOM’s commander– Gen. David Rodriguez–is waiting on U.S. officials to move on developing a counterinsurgency plan, not just for Nigeria; but also its neighboring nations. It would stretch across four nations (via Defense One):

U.S. Africa Command’s Gen. David Rodriguez, who previously served as the No. 2-ranking commander of the Afghanistan war, said he believes to turn the tide against Boko Haram would require a full-scale counterinsurgency plan across four countries.

The group now controls a vast territory of northeast Nigeria, Cameroon, Chad and Niger. Two weeks ago, Boko Haram fighters killed roughly 2,000 people in one attack in the region

“But I totally agree that it has to be much more effective all the way around to change what’s going on there, the negative impact on the people, the number of people displaced is just staggering,” he said, at the Center for Strategic and International Studies, a Washington think tank.

“I think it’s going to take a huge international and multinational effort there to change the trajectory of that … I think the Nigerian leadership and Nigerian militaries are really going to have to really improve their capacities to be able to handle that. … I hope that they let us help them more and more,” Rodriguez said.

Rodriguez answered critics of the international response to the terrorist groups by saying it was ultimately Nigeria’s responsibility to request additional U.S. help, which the general was eager to provide.

Regarding the ominous prediction of slaughter that Leah wrote about, other policy analysts are calling it the “perfect storm” of security threats:

“What has come together is a ‘perfect storm’ of security threats,” said Peter Pham, director of the Atlantic Council’s Africa Center, testifying Tuesday before the House Committee on Foreign Affairs. Pham listed Boko Haram’s continuing insurgency and terrorist attacks to neighboring countries beyond Nigeria, the possibly millions displaced by the conflict, and the economic pressure created by the falling price of oil.

“It’s Boko Haram version 3.0,” Pham told Defense One. “It’s a group that’s gone from being a violent extremist group, to a terrorist group carrying out attacks, suicide bombings and other acts of violence, to full-fledged insurgency, occupying territory, trying to set up a mini-government, a mini-caliphate of its own.”

Emmanuel Ogebe, manager for the Peaceful Polls 2015 Project promoting fair elections in Nigeria, said that while Boko Haram killed roughly 2,000 people in 2012, they have exceeded that in the first week of 2015.

Defense One noted that while Nigeria has a half trillion-dollar economy (thanks to oil), less than $10 billion is spent of defense. This is one of the reasons why the government has been unable to deal with this internal threat effectively and efficiently. The government severely curtailed military expenditures to prevent future coups after the last two military juntas, one lasting between 1966-79 and the other between 1983-1998.

The good news is that the U.S. is able to provide such assistance, but this looks like it will be a long operation.