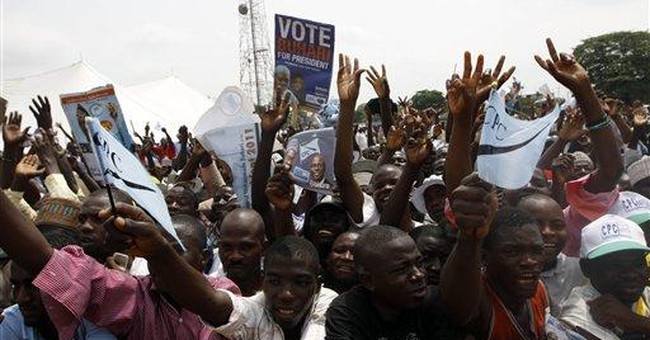 As if Nigeria hasn’t seen enough violence lately, experts are warning that elections being held next month may trigger even more bloodshed.

The country, which is divided nearly equally between Muslims and Christians, will head to the polls on Feb. 14 to choose from a number of presidential candidates. The main contenders, however, are Christian incumbent Goodluck Jonathan and Muslim opponent Mohammadu Buhari.

But depending on the results, Feb. 14 could turn into “a Valentine’s Day massacre for the poor Christians in northern Nigeria,” said human rights lawyer Emmanuel Ogebe during his testimony Tuesday to the House Foreign Affairs subcommittee on Africa, Global Health, Global Human Rights and International Organizations.

In 2011, Jonathan’s victory over Buhari triggered widespread violence against Christians in the Muslim north.

When Muslim challenger General Mohammadu Buhari lost the 2011 presidential election, violence erupted in 12 northern states where he commands a large following from the Muslim population. The final toll for the Christian community was staggering. In a 48-hour period, over 700 church buildings were burned, hundreds of Christians were confirmed killed, more than 3,100 Christian-operated businesses, schools, and shops were burned, and over 3,400 Christian homes were destroyed. Thousands of Muslim youths in 12 states with machetes, knives, matches and gasoline carried out this pogrom.”

Leading up to the 2015 general election, Nigeria is dealing with a number of issues that are heightening tensions, including, but not limited to: religious considerations of the candidates, the continued Boko Haram insurgency, fear of disenfranchisement among a large segment of the voting population, and the staggering number of internally displaced persons.

Because of these factors, which inhibit free and fair elections, lawyer Jadegoke Badejo said at the hearing that the “fear of political explosion is real.”

“In the past, such Gathering Clouds have fizzled away with deft political maneuvering and appeasement of the contending forces,” Badejo continued. “It seems that this time around, the forces of inefficiency, regional and religious sentiments, systemic and structural defects in the political configuration and the endemic corruption have finally consumed the country beyond redemption.”

Secretary of State John Kerry visited Lagos last week to meet with Jonathan and Buhari, both of whom gave their assurances that they’d urge their supporters to accept the election’s results and abstain from post-election violence.

If the elections are democratic and peaceful, Kerry promised the U.S. would do more to help in the fight against Boko Haram.