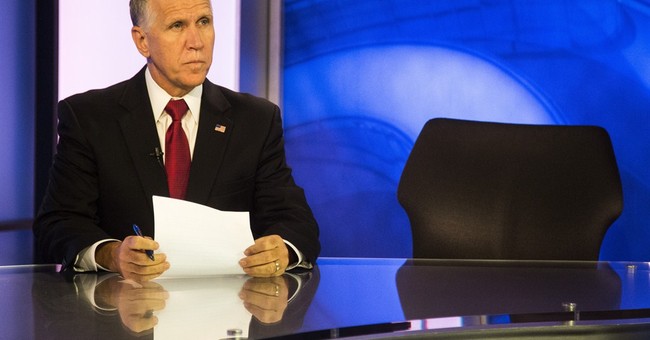 If there’s one thing that’s becoming ugly in North Carolina, it’s racially charged ads and fliers that have been unleashed in the final weeks of the campaign. First, there was a pro-Hagan flier saying if she does not win next week, Obama’s impeachment will begin; the text is superimposed over an image of a lynch mob. Then, the Senate Majority PAC ran a radio ad tying Sen. Kay Hagan’s Republican challenger Thom Tillis to the Trayvon Martin shooting.

Now, we have Alma Adams, the Democratic congressional candidate for North Carolina’s 12th district, calling Tillis an “Uncle Tom” at a Hagan rally.

“We need to send Uncle Tom–Tillis, that is–home,” Adams said.

This all comes off as a desperate–and egregious–attempt to turn out the Democratic base. When did race become an issue in this campaign? What does the shooting of Trayvon Martin have to do with anything in North Carolina? The fact that Hagan hasn’t denounced these attacks means that she knows she needs to use everything in the Democratic arsenal–disingenuous or not– that she can use to successfully cross the finish line next week.

Right now, two polls show how close this race is–perhaps a little too close for a sitting incumbent that has spent millions in her re-election bid and ends up way below 50 percent one week from Election Day.

Monmouth University’s poll had Hagan with a 2-point lead 48/46 with leaners. Yet, while Townhall has reported about the massive gender gap in this race, it seems from this poll that Tillis has closed that gap considerably, only trailing Hagan amongst women voters by single-digits:

In the upcoming election, 48% of likely North Carolina voters say they will vote for Democratic incumbent Kay Hagan and 46% will vote for Republican nominee Thom Tillis. Another 1% intend to vote for Libertarian Sean Haugh and 4% remain undecided. Hagan’s lead is within the poll’s margin of sampling error.

Both major party candidates have strong support among their partisan bases. Specifically, 89% of self-identified Democrats support Hagan and 89% of Republicans support Tillis. Independent voters actually support Tillis (50%) over Hagan (41%). Tillis also has a 55% to 40% edge among white non- Hispanic voters, but Hagan holds a much larger 78% to 16% advantage among voters of other races and Latino backgrounds.

The Monmouth University Poll finds a gender gap in this race that is not as large as in many other senate races across the country. Male voters in North Carolina tilt slightly Republican in their U.S. Senate vote – 49% support Tillis and 45% support Hagan. Women voters are more likely to back Hagan over Tillis by a 50% to 44% margin.

There are a few things to consider: 1) the sample size for this poll was only 432 likely voters. Likely voters is the best gauge for election polling this late in the game, but the rule of thumb for an accurate statewide poll is 600. For congressional races, it’s 350–and for nationwide polls; it has to be at least 1,000. 2) The poll is skewed heavily towards Democrats; it’s D+7.

The High Point University poll has the right tied at 44 percent between Tillis and Hagan, with Libertarian Sean Haugh coming in at 5 percent.

The sample size was 862 registered voters of which 802 were determined to be likely voters in this upcoming election, with an equal number of Democrats and Republican voters being included in the poll. Then again, the new NBC News/Marist poll was D+5 and had the raced tied; Hagan was leading by 4 earlier this month.

While the majority of polls have shown Hagan in the lead, she’s been within the margin of error leaving out the outlier surveys; there has been only one poll where she was leading by 10 points, which was conducted by a right-leaning polling firm and the sample size was well below 600.

Tillis told Townhall he didn’t expect to be leading in the summer months. Momentum across the country seems to be moving in the Republicans’ direction–and Tillis seems to be getting some dividends from that shift. The question is will it be enough for him to clinch victory, or will it be too little too late?