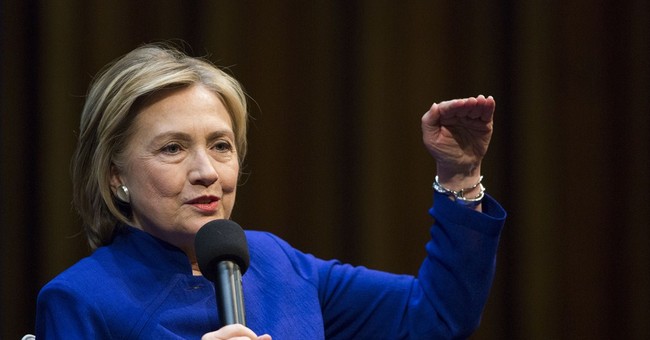 As the Washington Free Beacon’s Ellison Barber noted before Independence Day, Hillary Clinton’s approval rating will continue to drop amongst Independents and Republicans. Well, you can add Democrats to that list (via Weekly Standard):

A new poll of the potential 2016 presidential field from Quinnipiac, conducted at the end of June, found support for Clinton among Democratic primary voters at 58 percent. That's an 11-point drop from an ABC News/Washington Post poll of the potential Democratic field—conducted in late May, before Hard Choices was released—that found 69 percent supported Clinton over any other possible Democrats

According to the Quinnipiac poll, the biggest beneficiary of Clinton's drop in support appears to be Elizabeth Warren, the first-term senator from Massachusetts and a favorite of progressive populists. Warren received 11 percent support, while Vice President Joe Biden has 9 percent. Governor Andrew Cuomo of New York received four percent, while governor Martin O'Malley of Maryland and former governor Brian Schweitzer of Montana each polled just one percent.

Now, Clinton still has a forty-seven-point lead over Warren. Still, the Elizabeth Warren wing of the Democratic Party, which is the liberal base, probably sees this as a positive development. But, over at Hot Air, Allahpundit remains skeptical of this supposed Warren candidacy:

The silliest thing about this is that, of the two of them [Warren and Hillary], Warren would be much more likely to run against Obama’s record than Hillary would. Hillary’s stuck with O’s foreign policy and, as a former cabinet member, can’t be too harsh in attacking him on domestic policy. Warren can attack him full force, though — that’s the whole reason the left’s eager for her to run. She can make the purist liberal critique of O’s centrist failures, starting with financial reform, that the Clintons can’t. For Obama to prefer Warren to Hillary, he’d have to be so disgusted at the meagerness of his own legacy that he’d want the next nominee to call him a failure rather than defend that legacy as a success worth building on. Ideologue though he is, does he strike you as the sort of guy whose ego would permit him to do that?

So, who could challenge Hillary if it isn't Warren?

Last week, Josh Kraushaar at National Journal outlined her flaws in being a bad campaigner and “tone-deaf” when it comes to discussing her financial security. But, he added that:

Her biggest asset is the fact that the entire Democratic Party infrastructure is behind her, seemingly resigned to her vulnerabilities but hopeful about her potential. Even progressives who are nervous about her Wall Street connections are merely hoping to nudge her leftward, and not aggressively challenge her with an actual candidate. With a lackluster Democratic bench, it's hard to find many alternatives even willing to throw their names out there.

He noted that Kaine’s down-to-earth personality and executive experience from being the former Governor of Virginia were two qualities that Hillary Clinton lacked. Senator McCaskill’s could’ve exploited Hillary’s less than tactful description of her wealth amidst tough economic times for many Americans, and highlight what progressives can’t stand about her: her corporate ties, pragmatic centrism, and “perceived disconnect from the middle class.” Kraushaar added that save for another Todd Akin 2018 run for the U.S. Senate, McCaskill’s days representing Missouri are numbered.

Then again, a lot can change in two years. That’s a lifetime in politics.

In 2004, there was this newly elected Senator from Illinois named Barack Obama, who said he wasn’t ready to run for president.

You know, I am a believer in knowing what you're doing when you apply for a job. And I think that if I were to seriously consider running on a national ticket, I would essentially have to start now, before having served a day in the Senate. Now, there are some people who might be comfortable doing that, but I'm not one of those people.

He now haunts our dreams.