As Violent Crime Drops, Why Is Law Enforcement More Militarized? 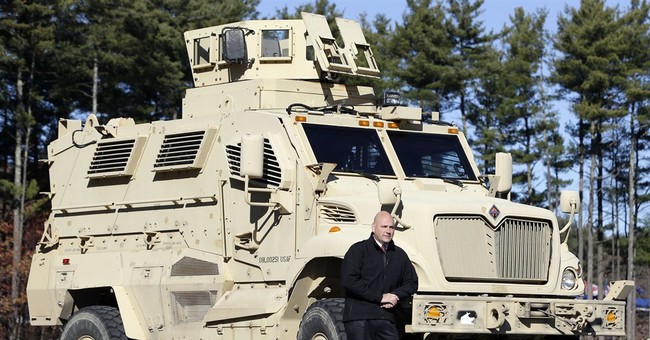 What is the 1033 program? Well, it’s a law that says excess equipment from the Department of Defense can be transferred to local law enforcement. It started in the 1990s. Since then, $4.3 billion in equipment has been handed over to local police forces.

These military equipment exchanges will reach record highs this year (via WSJ):

How the program works: When the U.S. Department of Defense has surplus gear — either because the military has upgraded to new gear or because it’s no longer necessary — they put it on offer for U.S. law enforcement, with the majority going to state and local agencies. Law enforcement agencies request the surplus gear — anything from helmets to machine guns to armored vehicles — through a state coordinator, who vets the request and then sends it on to Law Enforcement Support Office, which facilitates the program. The local law enforcement agencies pay for shipping but otherwise get this gear free of charge.

Police forces in general have become more militarized in recent years as more and more include SWAT teams. SWAT raids have increased 1400% between 1980 and 2000, according to Peter Kraska, an Eastern Kentucky University professor who tracks SWAT data. The New York Times recently reported on a small Wisconsin town where the local police’s acquired MRAPs — mine-resistant vehicles more commonly seen in war zones than small-town America.

It seems sort of ridiculous for this military build-up in our law enforcement given that violent crime is continually declining. According to the FBI, in the first six months of 2013, murders declined 6.9 percent, forcible rapes declined 10.6 percent, and aggravated assaults decreased 6.6 percent. Charles Cooke at National Review not only mentioned in his June 27 article that violent crime has hit a 50-year low, but that these militarized police forces are more dangerous than anything they’ll encounter maintain law and order.

So, has this agreement between the Department of Defense and law enforcement resulted in casualties?

Sadly, it has – with Alecia Phonesavanh detailing a drug raid on her home that left her two-year old son with injuries so severe from a flashbang grenade that he had to be placed in a medically induced coma. The raid itself was a mistake, as the person police were trying to arrest didn't even live there.

The ACLU reported recently that SWAT teams in the United States conduct around 45,000 raids each year, only 7 percent of which have anything whatsoever to do with the hostage situations with which those teams were assembled to contend. Paramilitary operations, the ACLU concluded, are “happening in about 124 homes every day — or more likely every night” — and four in five of those are performed in order that authorities might “search homes, usually for drugs.” Such raids routinely involve “armored personnel carriers,” “military equipment like battering rams,” and “flashbang grenades.” Were the military being used in such a manner, we would be rightly outraged.

The Right’s silence on the issue is vexing indeed, the admirable attempts of a few libertarians notwithstanding. Here, conservatives seem to be conflicted between their rightful predilection for law and order — an instinct that is based upon an accurate comprehension of human nature and an acknowledgment of the existence of evil — and a well-developed and wholly sensible fear of state power, predicated upon precisely the same thing. As of now, the former is rather dramatically winning out, leading conservatives to indulge — or at least tacitly to permit — excuses that they typically reject elsewhere. Much as the teachers’ unions invariably attempt to justify their “anything goes” contracts by pointing to the ends that they ostensibly serve (“Well you do want schools for the children or don’t you? Sign here”), the increasingly muscular behavior of local police departments is often shrugged off as a by-product of the need to fight crime. This, if left unchecked, is a recipe for precisely the sort of carte blanche that conservatives claim to fear.

Will the Right acknowledge the scale of the threat, applying its usual mistrust of power to a favored group, or will its usually alert advocates leave themselves willfully in the dark until, one day, a flashbang with their name on it is tossed through the window to wake them up with a start?

I couldn’t agree more. Conservatives should be weary of this trend. It's fine to be tough on crime – we should. But, when toddlers have holes in their chests that expose their ribs from flashbang grenades – and the threats that require the deployment of these heavily armed vehicles/forces aren’t proportional – what’s the use for all of this excess military equipment? After all, where in America do you see homeowners dotting their properties with landmines that would justify the use a MRAP vehicle?