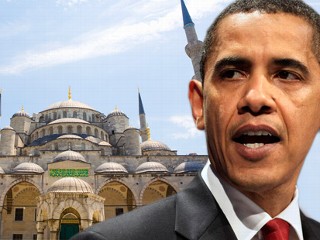 Is President Barack Obama now taking a page from GOP Chairman Michael Steele's failed communications strategy?As you may recall, Steele's controversial criticism of Rush Limbaugh occurred when he appeared on CNN's now-defunct show "D.L. Hughley Breaks the News." For a Republican, of course, CNN is hostile turf -- one might even say, foreign territory. Apparently seeking to impress the hostile liberal host and audience, Steele rejected the notion that Limbaugh was the "de facto leader of the Republican Party," and then took a few shots at what must have appeared to be (on CNN, at least) an easy target. Steele's goal was presumably to appear as a "reasonable" Republican. From a strategic standpoint, this makes sense. You throw an unpopular team member under the bus in order to be perceived by the crowd as being "reasonable" yourself. If done correctly, so the theory goes, this technique can earn you bona fides -- which then enables you to reach out to the other side. Of course, it didn't work; as they say, you can't make friends of your enemies by making enemies of your friends. ... This is not to say that Republicans should never criticize Republicans and Democrats should never criticize Democrats, but it is to say that it is a mistake to do so merely in order to be perceived as "reasonable".   And if you occupy a position of leadership, you should also make sure your criticism comes in the proper venue.Which brings me to Barack Obama...As he travels abroad this week, Obama also faces a skeptical foreign audience. His goal, it seems, is to concede past mistakes (read throw an easy target -- George W. Bush -- under the bus), in order to gain their respect. There are several examples of this maneuver, but the following regards Obama's speech in Turkey:

As he has been repeatedly doing throughout this trip, President Obama apologize for their tense relationship during the Bush administration, which resented Turk officials' refusal to allow US troops to enter Iraq through their country.

"I know there have been difficulties these last few years," he said. "I know that the trust that binds us has been strained, and I know that strain is shared in many places where the Muslim faith is practiced. Let me say this as clearly as I can: the United States is not at war with Islam.

(Obama Translation: Look, I know the guy before me was a right-wing redneck nut who clings to God and guns. I'm a lot cooler and more cosmopolitan than that. We can work together.)If the notion that a President of the United States can improve the image of his country by apologizing for a past President (as well as for his own nation's past actions) angers you -- it ought to. Just as Steele and Limbaugh ought to be political allies domestically, Obama and Bush are on the same team when it comes to facing the rest of the world. In both cases, they essentially decided to sacrifice a weak family member in order to appease the gods.Clearly, Michael Steele committed a political gaffe which has hurt his reputation and damaged the GOP. But Barack Obama has done something much worse: By breaking the tradition of not criticizing your own country abroad, Barack Obama has undermined this nation in an attempt to be popular with Europeans and the Muslim world -- and to perceived as a "reasonable" American. And unlike Steele -- who made his remarks under duress -- Obama is reading from a Teleprompter ...
ADL Tweet on Avoiding 'Cultural Appropriation, Cultural Stereotypes, and Gender Norms' Gets Massively Ratioed
Rebecca Downs
Obama Campaigns with McAuliffe in VA: Republicans are 'Trying to Systematically Prevent' People from Voting
Landon Mion
Youngkin Calls for Loudoun County School Board to Resign After Email Revealed a Sexual Assault Cover Up
Landon Mion