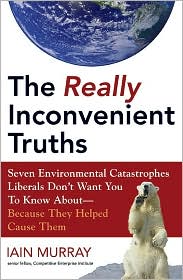 Last night, I attended a terrific little book reception for Iain Murray, author of "The Really Inconvenient Truths" -- a book which pokes holes in environmentalist movement dogma.  The event took place on the rooftop garden of Christian Josi, one of the event organizers.  Josi says of the book, "It’s one of my all-time favorite books by one of my all-time favorite people."

Senator Jim Inhofe (R-OK) -- a champion on this issue -- was kind enough to attend -- and introduce Murray.  Inhofe was unstaffed, and actually drove himself to the event, which took place in Old Town Alexandria, VA.

Murray's remarks were brief and witty.  His British accent would probably make him sound erudite were he to merely read the phone book -- but his analysis is well reasoned and compelling.