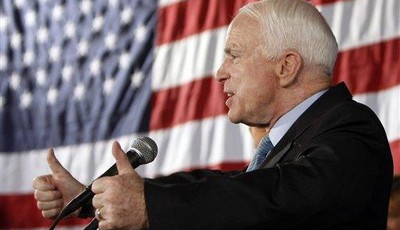 As I noted last night, John McCain is lucky to have gotten a head-start in defining Barack Obama.

During his victory speech last night, McCain continued to avail himself of this opportunity, taking several jabs at Obama, including the following key excerpts:

I will fight every moment of every day in this campaign to make sure Americans are not deceived by an eloquent but empty call for change that promises no more than a holiday from history and a return to the false promises and failed policies of a tired philosophy that trusts in government more than people.

Will the next President have the experience, the judgment experience informs, and the strength of purpose to respond to each of these developments in ways that strengthen our security and advance the global progress of our ideals? Or will we risk the confused leadership of an inexperienced candidate who once suggested invading our ally, Pakistan, and sitting down without pre-conditions or clear purpose with enemies who support terrorists and are intent on destabilizing the world by acquiring nuclear weapons?

He embraced his status as the GOP's "nominee for president," refferred to terrorists as "moral monsters," and, also added …

“I'm not the youngest candidate. But I am the most experienced.”

McCain's speech focused on several substantive policy areas, including fixing Social Security and Medicare, rethinking our military mission, and making the tax code simpler, just to name a few.  He also made sure not to be labeled the anti-Obama/anti-hope candidate by closing on this optimistic note:

Don't tell me what we can't do. Don't tell me we can't make our country stronger and the world safer. We can. We must. And when I'm President we will.

Why Did Biden's ATF Nominee Go on Chinese Communist TV...And Why Didn't He Disclose That?
Matt Vespa
Get Ready: Vaccine Mandates for Active Duty Troops To Be Announced
Rebecca Downs
DeSantis Blasts Biden: 'Why Don’t You Do Your Job?'
Katie Pavlich
Biden's Approval Down in Yet Another Poll
Rebecca Downs
Senate Democrats Kill Proposal to Provide Americans with Inflation Transparency
Rebecca Downs
No New Hearings for Biden's Gun-Grabbing ATF Nominee Who Might Have a Racism Problem
Matt Vespa
CARTOONS | Steve Kelley
View Cartoon
Most Popular