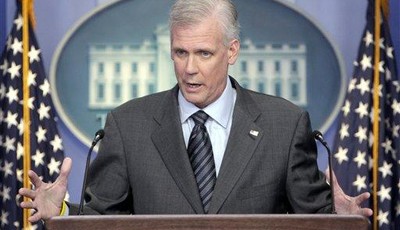 Hugh interviewed Tony Snow, yesterday Wednesday (where did the time go!?).  One of the things that came up was whether or not we would be seeing more staffers leaving the White House.  From that, came this interesting conversation:


HH: Your intention to go the distance, Tony Snow?

HH: How long will that be?

TS: I’m not going to tell you.

This makes me wonder about Rove's line that he was leaving now because the CoS said leave before Labor Day -- or stay till the end of the term.

Update:  As the NY Times reported:

(Rove) said his hand was finally forced when Mr. Bolten recently told senior aides that if they stayed past Labor Day he would expect them to stay through the remaining 17 months of Mr. Bush’s term.