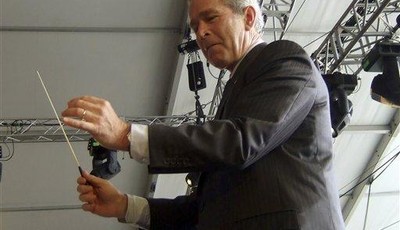 You know, there are times-- Medicare Drug Bill, No Child Left Behind, comprehensive immigration-- when I forget why I like President Bush. It happens to all of us. We're at the end of an eight-year haul, here, and any president in his eighth year has had sufficient time to make sufficient missteps in any direction to displease every single part of his constituency. It's the curse of being twice elected by that constituency.

So, yes, sometimes I get frustrated and forget things like this:

JoAnn Falletta was doing what a conductor should _ concentrating on the orchestra in front of her. No wonder it took her a few seconds on Sunday to realize someone behind her was motioning for a try. President Bush.

"Smiling at me kind of devilishly," Falletta said.

She gave him her baton and stepped aside.

Gesturing exuberantly, the president led the orchestra during part of its performance of "Stars and Stripes Forever."

"We didn't expect him to know the score so well," Falletta said afterward. "He was not shy about conducting at all. He conducted with a great deal of panache."

Never underestimate likeability when you're dealing with the American voter. It's why Rudy has led for so long despite his lack of social-con cred. It's why I doubt the true strength of the Hillary juggernaut, powered as it is, partly by a woman who public speaks like she's opening doors at the Addams mansion, and comes across about as warm as flounder skin, and as real as a fish tale.

This is the kind of stuff that made Bush that guy you want to have a beer with over Sir Kerry of Windsurfingham, and it's part of what wins elections. A large part. It doesn't eclipse policy questions, but in the close elections we're likely to face in the next generation of American voting, it can be huge.

And, before the liberals read this and jump all over Bush's sense of propriety or some such nonsense, please remember that if Bill Clinton had done the same, he likely would have been promoted to a full-time job in front of the Boston Pops, so lauded would he have been.

Oh, look! They're already making a fuss. This take-down of Bush's musical "bullying" is particularly melodramatic. Get. A. Grip.