Rudy and the Anti-Clinton Correction 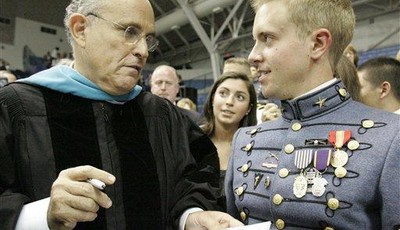 Is it just me, or is it hard to imagine a Clinton making this correction?

Did a politician just voluntarily demote himself from "high honors" to "honors" graduate when he could have let the slight promotion stand? Well done, Rudy. A small gesture, but a meaningful one, it seems.

Click through for his whole speech-- very heavy on 9/11, importance of military strength, striving for victory, and plain old inspiration. I have a theory that the fewer headlines come out of a candidate's commencement speech, the better the speech served the audience for which it should be intended-- the graduates-- as opposed to the speaker. Giuliani's speech, when compared to Clinton's on the same weekend, in the same state, has gotten very little ink.