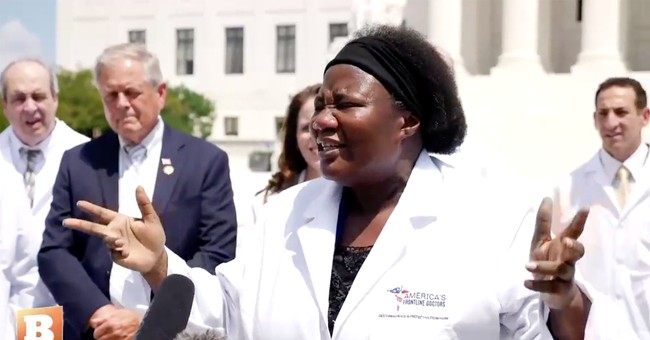 A video of a dozen medical professionals who call themselves "America’s Frontline Doctors" holding a press conference in front of the United States Supreme Court went viral Monday night. The video, a livestream published by Breitbart News, featured supposed medical professionals speaking out on the COVID-19 pandemic and pushing back on mainstream narratives about the necessity of lockdowns, need for masks, and the dangers of hydroxychloroquine.

According to Breitbart, the press conference was sponsored by the Tea Party Patriots and, in addition to the doctors, featured Rep. Ralph Norman (R-SC). There was one woman who particularly caught the public’s attention, however. Stella Immanuel, a Cameroon-born primary care physician from Houston, gave an impassioned speech claiming she has treated more than 350 coronavirus patients—including some with high blood pressure, diabetes, and asthma—and has yet to lose a single one after administering hydroxychloroquine, zinc, and Zithromax. Immanuel said she has also prescribed hydroxychloroquine to her and her staff as a preventative measure. She added that masks and lockdowns are foolish.

“I came here to Washington, D.C. to say America, nobody needs to die,” she said. “If some fake scientist, some person sponsored by all these fake pharma companies says, ‘We’ve done studies and found it doesn’t work,’ I can tell you categorically it’s fake science. I want to know who’s sponsoring that study. I want to know who’s behind it. Because there is no way I can treat 350 patients and counting and nobody is dead. They all get better.”

?? HUGE viral broadcast from earlier today of a group of Doctors angry with the media's narrative about COVID and Hydroxychloroquine. ?? Watch this!

The video took social media by storm, quickly becoming the second most-engaged post on Facebook on Monday and was shared nearly 600,000 times. It also caused “Breitbart” and “hydroxychloroquine” to trend on Twitter overnight. According to New York Times Tech Columnist Kevin Roose, the video received 14 million views in six hours. For reference, the infamous “Plandemic” video, which was removed from the internet for spreading conspiracy theories after it went viral, garnered approximately eight million views over several days. Breitbart's video caught the attention of high-profile figures, including President Donald Trump and his son, Donald Trump Jr., who both shared several versions of the press conference on their Twitter accounts.

The #2 most-engaged post on Facebook today is a Breitbart video of a group of doctors claiming that hydroxychloroquine is "a cure for Covid" and "you don't need a mask."

Twitter, Facebook, and YouTube worked overtime to remove the videos. A Twitter representative told CNN that the action was taken “in line with” their coronavirus misinformation policy. Likewise, a Facebook spokesperson said the company “removed this video for sharing false information about cures and treatments for COVID-19,” adding that the platform is "showing messages in News Feed to people who have reacted to, commented on, or shared harmful COVID-19-related misinformation that we have removed, connecting them to myths debunked by the WHO." Twitter also partially disabled Donald Trump Jr.’s account for "violating the policy on spreading misleading and potentially harmful information related to COVID-19." Additionally, a Squarespace website for America’s Frontline Doctors, which the Washington Post said appeared to be only 12 days old as of Tuesday, now says it has expired.

Yes, we removed it for sharing false information about cures and treatments for COVID-19.

Meanwhile, the media have rushed to mock the statements expressed in the video and discredit the doctors who made them. The Daily Beast ran the headline, “Trump’s New Favorite COVID Doctor Believes in Alien DNA, Demon Sperm, and Hydroxychloroquine,” while the Huffington Post declared hydroxychloroquine a "fake cure." Twitter’s “trending” section pushed the headline “Hydroxychloroquine is not an effective treatment for COVID-19, according to the FDA,” which it said has deemed the drug “unlikely to be effective” and revoked its emergency use authorization in June. It also advertised the World Health Organisation’s discontinuation of its study on the drug after finding it did “not reduce mortality for hospitalized COVID-19 patients,” which WHO announced back in May. Ironically, the mainstream media itself has flip-flopped on its hydroxychloroquine messaging. Even CNN was recently forced to admit the “surprising” results of a new study finding that hydroxychloroquine helped combat the virus after months of insisting it was a hoax.

As for Immanuel, she remains undeterred by the criticism.

Did Team Biden Even Consider the Optics of This Moment During Florida Trip?
Townhall
Tweeter risks wrath of some of America's most privileged lib journos in order to expose their efforts to hide their backgrounds from the public; UPDATED
Twitchy
Supreme Court to Hear Case of Man Who Got Four Days in Jail for Mocking a Police Department on Facebook
Redstate
I Know the Woke Military's Dirty Little Secret
PJ Media