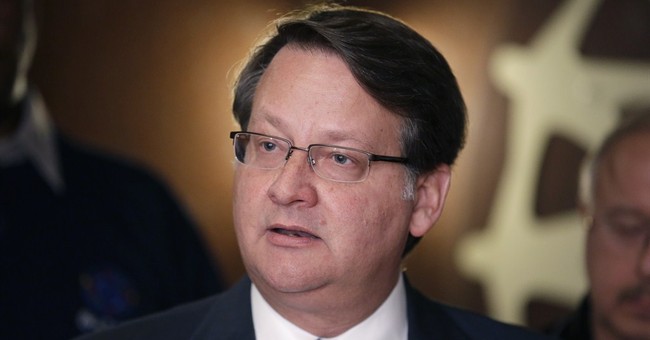 Democratic Michigan Sen. Gary Peters published an op-ed in People Magazine on Wednesday where he recounted his wife’s abortion decades ago to “underscore the importance of safeguarding Roe v. Wade.”

Peters, who is the chair of the Democratic Senatorial Campaign Committee, wrote in his piece that the 49th anniversary of the landmark Supreme Court case Roe v. Wade occurred this month. He claimed that a woman's ability to make her own “health care decisions” is under a “very serious threat” should the Court overturn Roe this year.

Peters then wrote that in the 1980s, his wife was pregnant with their second child. Four months into the pregnancy, her water broke unexpectedly. Their doctor informed them that their unborn baby could not survive without amniotic fluid and told the couple to return home and wait for a miscarriage to happen.

However, the miscarriage did not occur overnight. The next day, the doctor told the couple to wait yet another day. Again, Peters’ wife did not miscarry. Their doctor went to the hospital board to seek an exemption to their policy against providing abortions. The doctor was not given an exemption to provide Peters’ wife with an abortion. The couple’s friend helped them obtain an abortion at another hospital.

"We again returned to our doctor who became very worried about my wife's health and a sepsis infection that would not only endanger her health — and the possibility of ever having a child again — but could even put her life at risk.

Our doctor went to the hospital board, asking for an exception to their policy prohibiting abortions. I remember what happened next, vividly.

He left us a message on our answering machine. He'd been refused an exemption because there was a faint heartbeat detected, even though there was no chance for the fetus to survive. He told us the decision was just based on politics, not good medical advice or practices. He recommended we find another physician immediately due to worries about her health.

We were able to get her into another hospital quickly through a personal friend. When my wife was examined, the doctor was not only alarmed — he said an immediate emergency procedure was necessary for her health and possibly her life."

The Supreme Court heard oral arguments Dec. 1 and a decision is expected next summer.

Peters, who has a 100 percent rating on NARAL Pro-Choice America’s website, described Dobbs as an “attack” on the rights of women to make their own choices for their health.

“Now, as the Supreme Court is reviewing a Mississippi law banning abortion at 15 weeks and overturning Roe v. Wade as we know it, I am sharing this story once again — because the stakes have gotten even higher.

The power of the Senate to confirm or reject Supreme Court Justices means Senate campaigns are the frontlines of the fight. We must send a firm message: attacks on Roe v. Wade and the rights of women to make their own health care choices will not be tolerated.

My story is one that is very personal, and painful — and folks all across the country face similar situations each and every day. That is why we cannot afford to go backwards. In 2022, we must protect the right of patients to make their own medical decisions without interference from politics.”

Since Roe became law of the land in 1973, an estimated 62 million abortions have occured in the United States, according to National Right to Life Committee. In her Dobbs amicus brief filed last summer, Mississippi Attorney General Lynn Fitch wrote that both Roe and Planned Parenthood v. Casey are “egregiously wrong.”

“The conclusion that abortion is a constitutional right has no basis in text, structure, history, or tradition,” Fitch said in the brief. “So the question becomes whether this Court should overrule those decisions. It should.”