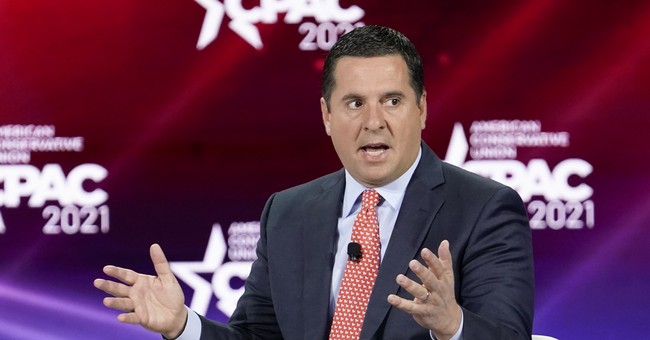 On Monday, House Republican Rep. Devin Nunes (CA) reportedly said he will resign from Congress at the end of this month and become CEO of former President Trump’s recently announced media and technology company.

According to Fox News, a source confirmed that Nunes plans to leave for a “job offer that he can’t refuse.”

“Trump Media & Technology Group today announced that Congressman Devin G. Nunes has been selected to join the Company as Chief Executive Officer,” the company said in a press release obtained by Fox. “Mr. Nunes will be leaving the U.S. House of Representatives and will begin his new role as a Chief Executive Officer of TMTG in January 2022.”

In the release, Trump commented that Nunes is a “fighter” and that he will work to stop the liberal media and Big Tech.

“Congressman Devin Nunes is a fighter and a leader. He will make an excellent CEO of TMTG. Devin understands that we must stop the liberal media and Big Tech from destroying the freedoms that make America great,” Trump said in the statement.

In a letter to his constituents, Nunes confirmed that he will leave Congress for the position, local outlet KMOV4 reported.

“I’m writing to let you know I’ve decided to pursue this opportunity, and therefore I will be leaving the House of Representatives at the end of 2021,” Nunes said in the letter.

Trump Media and Technology Group, which was founded in February, “aspires to create a media powerhouse to rival the liberal media consortium and fight back against the ‘Big Tech’ companies of Silicon Valley, who have used their unilateral power to silence opposing voices in America,” the company’s website states.

“If Big Tech can censor the President of the United States, then they can censor anyone. To counter this liberal bias and dangerous exercise of tech monopoly censorship, Donald J. Trump and TMTG intend to create a media and technology company rooted in social media, digital streaming, information technology infrastructure, and more,” it continues. “In the year 2021, the media pendulum has swung dangerously far to the left. TMTG intends to even the playing field.”

Nunes has represented California’s 22nd congressional district since 2003 and was chair of the House Intelligence Committee from 2015 to 2019. He was a member of Trump’s presidential transition team.