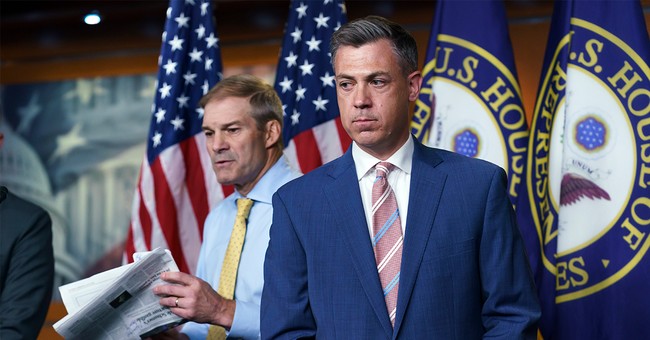 This week, over 60 Republican Members of Congress sent a letter to the Department of Justice (DOJ) demanding answers as to why the Department is targeting parents who oppose Critical Race Theory (CRT) and mask mandates in schools.

As Spencer covered, this week, Attorney General Merrick Garland sent a memo to the FBI announcing a “partnership among federal, state, local, tribal, and territorial law enforcement to address threats against school administrators, boards members, teachers and staff” as well as “a series of measures designed to address the rise in criminal conduct directed toward school personnel” in response to a National School Board Association letter claiming parental opposition to school mandates, like mask mandates, and ideology, such as CRT, "could be the equivalent to a form of domestic terrorism and hate crimes."

In Garland’s memo to the FBI, he wrote that there’s been a “disturbing spike in harassment, intimidation, and threats of violence against school administrators, board members, teachers, and staff who participate in the vital work of running our nation's public schools.”

In the letter from Congress, they ask Garland for specific examples of “criminal conduct” perpetrated by parents toward school board members and for insight regarding how these investigations will be carried out. Furthermore, they emphasize how silencing parents who oppose ideology weaved into their child’s curriculum violates their Constitutional rights.

“During the COVID-19 pandemic, parents are taking notice of what and how their children are being taught in the classroom, hot-button social issues being weaved into the curriculum, and what safety protocols their child is supposed to follow while attending school. While some of these meetings may get heated, most of the parents who have been demanding these meetings have simply voiced their passions and concerns for their children and their futures.

While we agree with you that any threat of violence against these government officials should be condemned and investigated, no government official has the right to claim that a citizen may not peacefully speak out against government policies. Statements made by officials like former Governor Terry McAuliffe of Virginia, who publicly stated, ‘I don’t think parents should be telling schools what they should teach,’ are utterly unacceptable. Government officials need to recognize that in our Constitutional republic, they are elected to represent the public. While they should never be subjected to threats, they are not above criticism or disagreement from the citizens who elected them. If we are to live in a free society, it is your job as Attorney General of the United States to defend the rights of all citizens.”

The letter wraps up with a series of questions regarding the DOJ’s agenda to mobilize against parents who oppose CRT and mask mandates.

“As the top law enforcement officer in the United States, it is your responsibility to combat criminal behavior as well as defend the Constitutional rights of all Americans,” the letter concludes. “We hope you will take these duties seriously and not stifle free speech while moving forward with your investigations.

Today, I sent a letter to @TheJusticeDept to demand answers on why the DOJ is targeting parents who are opposing CRT and COVID mandates in our schools.

This politicization of our justice department is unheard of and unacceptable. Read below ? pic.twitter.com/5jgz85GseS