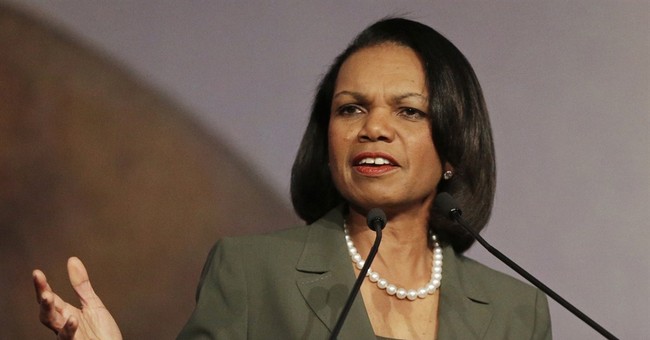 On Tuesday, former Secretary of State and former National Security Advisor Condoleezza Rice penned an op-ed tearing the Biden administration’s hasty withdrawal from Afghanistan and countered the implication put forth by President Biden that the Afghan people chose their fate.

In the op-ed, published by the Washington Post, Rice rebutted Biden’s comments in his address on Monday, where he stated “[w]e gave them every chance to determine their own future.”

“In the wake of Kabul’s fall, though, a corrosive and deeply unfair narrative is emerging: to blame the Afghans for how it all ended. The Afghan security forces failed. The Afghan government failed. The Afghan people failed. ‘We gave them every chance to determine their own future,’ President Biden said in his address Monday – as if the Afghans had somehow chosen the Taliban,” Rice states in the article. “No — they didn’t choose the Taliban. They fought and died alongside us, helping us degrade al-Qaeda.”

Rice added on, noting that the Afghans “seized the chance to create a modern society” where women and girls could attend school and have their human rights respected. These rights are likely to be retracted from women following the Taliban’s recapture of Afghanistan.

Rice argued that the United States could have followed our strategy in South Korea in Afghanistan. “We have understood this before. Technically, our longest war is not Afghanistan: It is Korea. That war didn’t end in victory; it ended in a stalemate — an armistice,” she stated in the article. “Here’s what we achieved: a stable equilibrium on the Korean Peninsula, a valuable South Korean ally and a strong presence in the Indo-Pacific.”

While Rice acknowledges that “Afghanistan is not South Korea,” she thinks “we might have achieved a reasonable outcome with a far smaller commitment.”

In the op-ed, Rice also claimed that the past four presidential administrations (one of which she worked for) are responsible for the “mistakes” that led to the Taliban’s recapture of Afghanistan. “The past years in Afghanistan have been difficult for every president, our armed forces, our allies and our country,” Rice states in the article.“Each of us who held positions of authority over those years made mistakes – not because we didn’t try or were heedless of the challenges. But the United States could not afford to ignore the rogue state that harbored those who attacked us on 9/11. The time will come to assess where we failed — and what we achieved.”

However, Rice did not let this notion let President Biden off the hook. Like many lawmakers and other government-affiliated individuals, she drew a comparison between Afghanistan and Saigon, and said our administration’s credibility is not intact.

“The pictures of the past few days will emblazon an image of America in retreat,” Rice states in the article. “It didn’t have to happen this way.”