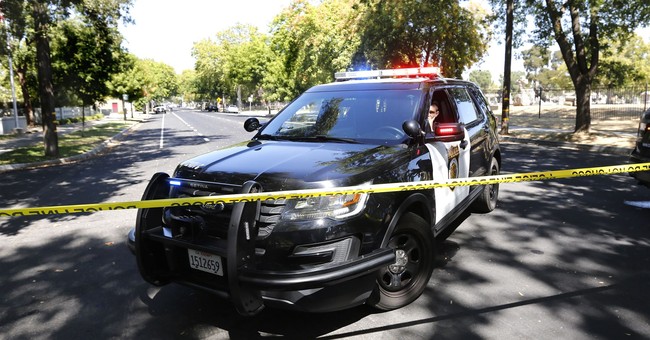 The Columbus Division of Police unveiled its pride cruiser for the month of June, which is decked out with rainbows, hearts, and flags and declares "love is love."

Officer Shawn Lutz, who is openly gay, says he is the division's LGBTQIA+ liaison officer in a video revealing the colorful ride.

"Im excited about this cruiser, it's great for representation," he said.

Make sure to say hi to Officer Lutz when you see him out and get a photo with our PRIDE cruiser! pic.twitter.com/2BMcCWI5gj

In an interview with 10 WBNS, Lutz explains what it's like to be in law enforcement as a "cisgender gay male."

Lutz says being openly gay has created unique challenges and opportunities. He says he loves his division and the support he’s gotten from fellow officers through the years.

He also views it as a way to get involved, help change policies and be a resource that can benefit everyone.

Still, he says his sexuality can sometimes become a negative focal point while on scene. That’s when, he says, he often needs to table his own thoughts or feelings and, instead, refocus on de-escalation.

“Though my identity has been called into question by people interacting with [me] on the street…that happened obviously during the civil unrest [in May of 2020]… I never let that be a place where that’s the time to have a political conversation,” he said.

Pride Month, he says, is about being out, proud and living freely while creating space for others to be seen.

Lutz hopes the Columbus Division of Police will always continue to be that safe space for others to tell their stories behind the person.

“Proximity brings kindness,” he said. “So, it’s better for us to be a part of these organizations and doing the advocacy that we need to do, rather than distance ourselves from it.”

Following record murder totals in 2020 and 2021, this is the priority of @MayorGinther. https://t.co/4BnLtaQTOF

Defund the Pride Police, what a waste of $. Now about fighting crime and public safety......... https://t.co/tqEHirc6n7

?? Can we just focus on getting the bad guys off the streets? Jeezus.

How many homicides have there been in the city of Columbus this year? Can we focus, please, instead of this nonsense? https://t.co/kzasHhVDoK

Columbus isn't the first city to have a pride cruiser. The NYPD has been using them for years.

Recommended
Donald Trump’s Supreme Court Legacy
Derek Hunter
Share this on Facebook
Tweet
Did a Co-Host for 'The View' Really Use Her Disabled Family Members to Defend Upholding Roe?
Matt Vespa
Dobbs Decision is a Crucial Reminder of How Much the 2016 Election Mattered
Rebecca Downs
Joe Biden Signs Gun Legislation Bill into Law
Sarah Arnold
Jean-Pierre Insists Biden is Not to Blame for Inflation
Sarah Arnold