Children Are Now Getting Hospitalized Over Formula Shortage 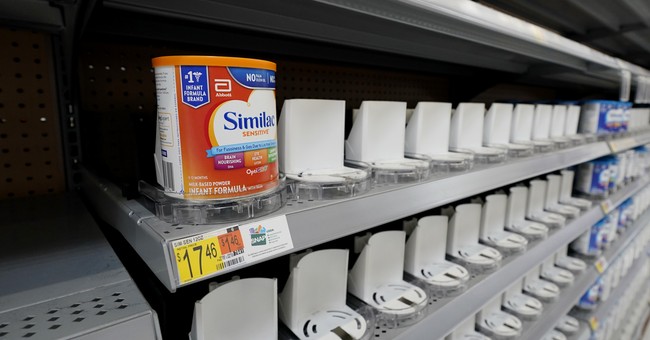 Two children in Tennessee have been hospitalized due to the nationwide formula shortage, as neither doctors nor the family members can find any suitable for their special medical needs.

“This is a crisis for us in health care,” said Dr. Mark Corkins, a pediatric gastroenterologist at Le Bonheur Children’s Hospital.

“This is not every child, not normal children, but literally the formula recall has led to these children requiring hospitalization,” Corkins said of the children, both of whom have intestinal conditions.

Their bodies could not handle switching to a different formula than the specialty one they typically use, Corkins said. They’re being treated “with IV fluids and nutrition until formula becomes available,” according to Fox 8 Live.

“This recall started in February. Even if you had several weeks of stock, we’re now out for the special formulas,” Corkins said. “So literally we have what we have. We have some things that we’re trying to find. We’re trying to use some alternatives but the standard ones, the ones you would think of, there is none to be had.”

The company and the FDA reached an agreement this week to re-open the plant. Production could start in two weeks and after that, it could take up to eight weeks for product to hit store shelves. Abbott will prioritize making EleCare, Alimentum, and metabolic formulas first.

"Our number one priority is getting infants and families the high-quality formulas they need, and this is a major step toward re-opening our Sturgis facility so we can ease the nationwide formula shortage. We look forward to working with the FDA to quickly and safely re-open the facility," said Abbott CEO Robert B. Ford. "We know millions of parents and caregivers depend on us and we're deeply sorry that our voluntary recall worsened the nationwide formula shortage. We will work hard to re-earn the trust that moms, dads and caregivers have placed in our formulas for more than 50 years."