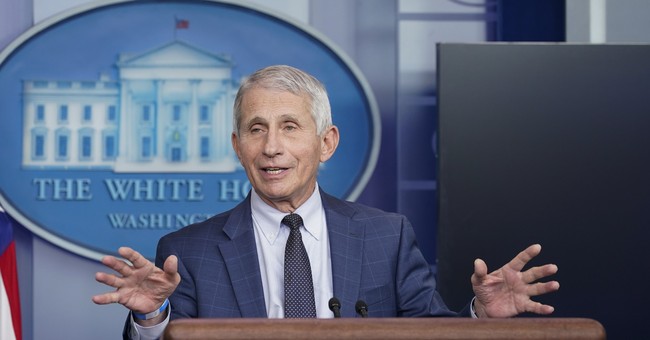 Last year, when Salem radio host Hugh Hewitt told Dr. Anthony Fauci that a significant number of Americans have lost confidence in him and perhaps it’s time to step down, the National Institutes of Allergy and Infectious Disease director rebuffed the notion.

“No. Absolutely unequivocally no, Hugh. Sorry,” replied the now-81-year-old chief medical adviser to the president.

Of course, Hewitt isn’t the only person who’s told him to his face it’s time to go. Sen. Rand Paul has demanded he resign during heated testimony as well, but to no avail.

Now, however, Fauci has revealed the one event that will get him out the door—at least as chief White House medical adviser.

Asked by CNN’s Jim Acosta if he’d remain in the White House if former President Trump ran and won re-election in 2024, Fauci was clear he's not interested.

“If Trump were to return to the White House as President, and COVID was still a threat or there was some other public health emergency, would you have confidence in his ability to deal with a pandemic of this nature? Would you want to stay on at your post?” Acosta asked.

“If you look at the history of what the response was during the administration, I think, you know, at best, you can say it wasn’t optimal,” Fauci said. “History will speak for itself about that.”

NEW: Dr. Fauci says if Trump is reelected, he would not continue to serve as White House Chief Medical Advisor pic.twitter.com/0HRu4ivDnV

This is the greatest endorsement of Donald Trump in 2024 possible. https://t.co/QxVfeiLPPc

Fauci has previously spoken about how “liberating” it is to work under President Biden.

“The idea that you can get up here and talk about what you know, what the evidence and science is, and know that’s it — let the science speak — it is somewhat of a liberating feeling,” Fauci said in January 2021.