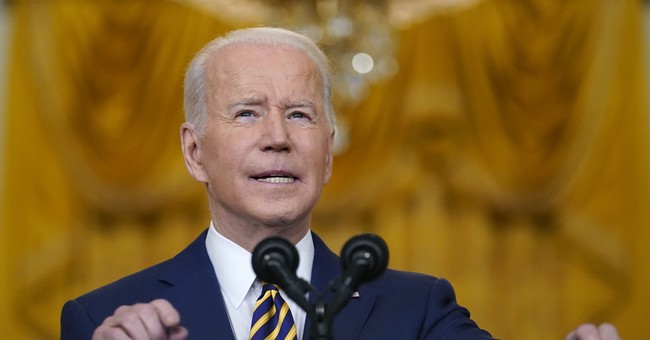 Sen. Marsha Blackburn (R-TN) called on President Biden to "apologize immediately" after he lashed out at a reporter’s question about Russian President Vladimir Putin.

As reporters left a meeting, Fox News’s Jacqui Heinrich asked, “Why are you waiting on Putin to make the first move, sir?”

Audio picked up the president’s response: “What a stupid question.”

Fact-check: Not a stupid question. And completely germane. https://t.co/mFuEMjf932

REPORTER: “Why are you waiting on Putin to make the first move, sir?”

BIDEN: “What a stupid question.” pic.twitter.com/rcKxNePAR3

This is extremely sexist and uncalled for. @JacquiHeinrich is a well-prepared, smart reporter, and Biden should apologize immediately. https://t.co/qFGqyFxPp2

The exchange came after Biden said during a press conference Wednesday that the U.S. and NATO allies’ response to a potential Russian invasion would depend on whether it was a “minor incursion” or not.

"Russia will be held accountable if it invades," Biden said. "And it depends on what it does."

"It’s one thing if it’s a minor incursion and then we end up having a fight about what to do and not do, et cetera," he continued. "But if they actually do what they’re capable of doing with the forces amassed on the border, it is going to be a disaster for Russia if they further invade Ukraine."

"President Biden has been clear with the Russian President: If any Russian military forces move across the Ukrainian border, that’s a renewed invasion, and it will be met with a swift, severe, and united response from the United States and our Allies," she said in a statement. "President Biden also knows from long experience that the Russians have an extensive playbook of aggression short of military action, including cyberattacks and paramilitary tactics. And he affirmed today that those acts of Russian aggression will be met with a decisive, reciprocal, and united response."