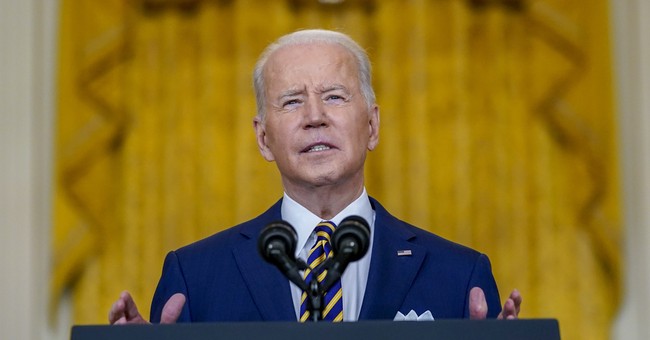 Joe Biden held a marathon presser yesterday. It was his first in almost 100 days. It was lengthy—and it was a grand buffet of word salad. There were a lot of words and little sense, but hey—he took the time to speak with his pre-selected group of reporters. The funny part was that Joe seemed sort of mad that the press was giving him bad press. Are you kidding me? Legions of liberal reporters have been twisting themselves into pretzels defending his administration. They’ve been propping up this dementia-ridden presidency since day one. There’s no good news coming from this White House. That’s why the news is crap, Joe. He also said that if his federal election takeover bill isn’t passed, the 2022 midterms might be illegitimate.

Oh, and he doesn’t believe the polls. That was his response when asked about middle America’s 180-degree turn on his tenure in the Oval Office. There were moments where he short-circuited. When he announced he would stick around a little longer, you know his staffers’ blood pressure spiked t0 217/95. That was probably around the time he said that Ukraine was probably going to be invaded by Russia and that our response would depend on the size of the incursion. I’m not kidding, and NBC News wrote it up.

“My guess is he will move in, he has to do something,” said Biden during a news conference marking his first year in office, referring to Russian President Vladimir Putin and Ukraine.

The declaration from Biden was striking given the escalating tensions there and the continued efforts by America and its allies to find a diplomatic solution.

Biden said Putin “will be held accountable” and has “never have seen sanctions like the ones I promised will be imposed” if Russia makes further moves against Ukraine. He added the U.S. would increase its troop levels in the region, including in Poland, keeping with obligations under the NATO treaty.

But Biden appeared to hedge his threats, distinguishing between a "minor incursion" and a full-blown attack.

"And it depends on what it does. It’s one thing if it’s a minor incursion and we end up having to fight about what to do and not do," Biden added.

A senior administration official told reporters in a telephone briefing Wednesday night evening that the United States was prepared to impose sweeping sanctions on Russia regardless of the amount of territory seized in a possible invasion of Ukraine.

If conventional military forces are acquiring land in Ukraine, the U.S. would consider that an invasion, regardless of the size, the official said.

Yeah, the damage control was immediate.

Clean up on aisle Psaki. pic.twitter.com/4LLKQAQ3rF

So, if we see Russian tanks moving into Ukraine, and it looks like that might happen, we shouldn’t be shocked since the president of the United States didn’t exactly take a full-throated ‘stay the hell out’ stance. Rumor has it that Russia is just waiting a little longer for the winter to set in, freezing the ground a tad more to make it easier to move armored divisions into the area—supposedly.