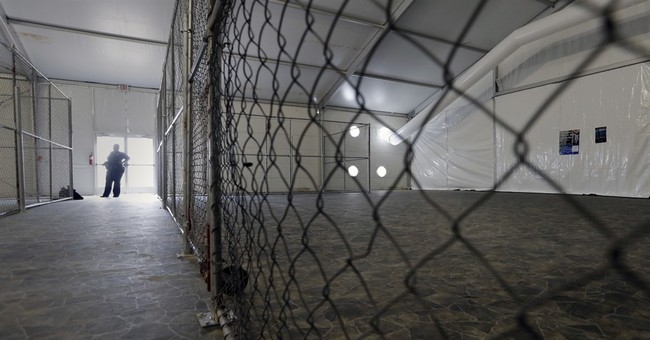 The Department of Homeland Security this week released photos from its migrant facility in Donna, Texas, that was nearly empty—quite a contrast from images that came out weeks ago showing hundreds of unaccompanied minors packed together. But that’s not an accurate portrayal of the situation at the facility, Rep. Henry Cuellar (D-TX) said.

According to the Democrat, the unaccompanied minors are still at the compound in Donna, but are in HHS-operated tents.

“All they’re doing is they’re moving kids from one tent to the other tent and saying, ‘Oh, they’re not in the Border Patrol (custody),’ but they’re right next door,” Cuellar said, according to Border Report. “They’re just next door in HHS.”

The Border Patrol released new photos from its tents in Donna, Texas, showing a virtually empty space compared to March. CNN and Wash Post report 6,000 were encountered on some days in April. Adults were expelled, but where are the many families that are being taken into custody? https://t.co/hG8HtnrNlo pic.twitter.com/Pz0eWuSQRx

Cuellar, who is vice chairman of the House Appropriations Homeland Security Subcommittee, has toured the Donna facility numerous times since the immigration influx into South Texas began after President Joe Biden took office, and he says the Donna compound grows each week.

Most recently, he said, five tents were added for HHS staff to hold and care for unaccompanied migrant youth, adding that each tent has the capacity to hold about 1,500 children.

Border Report on Wednesday revisited the compound and noted how it has grown since it was built in early February. Now, every corner of what used to be farm fields is full of white tents and everything is surrounded by black fencing that prevents anyone outside from looking in. (Border Report)

While acknowledging the unaccompanied minors are in HHS custody, DHS said in a statement their photos “demonstrate the tremendous progress that DHS and its partners have made to safely and efficiently transfer these children out of CBP custody and into the care of HHS.”