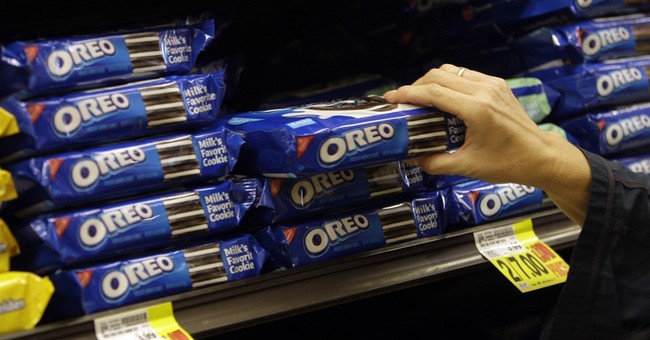 The debate over the radical Equality Act played out in the halls of Congress, on social media, and in the cookie aisle apparently.

Oreo weighed in after GOP Rep. Marjorie Taylor Greene and Democratic Rep. Marie Newman had a silent feud, with the progressive, whose daughter is transgender, putting a transgender pride flag outside her office, which is across the hall from Taylor Greene’s. That prompted the Georgia Republican to display a sign that reads, “There are TWO genders: MALE & FEMALE Trust The Science.”

Not to be left out, the Nabisco cookie brand jumped in the debate, noting on Twitter that "Trans people exist."

But Oreo’s display of wokeness was a bit too much for many on Twitter.

Why even take a political stance on this? This is why America is so divided. Even cookies have to be divisive.

thank you, large soulless brand, for confirming that what i have experienced throughout my life did indeed happen in a token gesture that im sure has nothing to do with manipulating more trans people into buying your cookies

Thank you, Mr. Corporation for validating the existence of trans people. Now, you could have donated to non-profit organizations to help uplift actual trans people but I guess having a random, poorly paid staffer type out a headline for woke points will also do the trick. https://t.co/lM6O5aNtKG

This is far from the first time Oreo embraced its wokeness. In October of 2020, the cookie celebrated National Coming Out Day with the fillings colored to match various pride flags. The company also released a Proud Parent video along with PFLAG National.

A new film from @Oreo and @360i builds on the brand's and PFLAG’s “Proud Parent” platform, which highlights the importance of family support when it comes to fostering LGBTQ+ acceptance. https://t.co/fwvbC8vHJJ