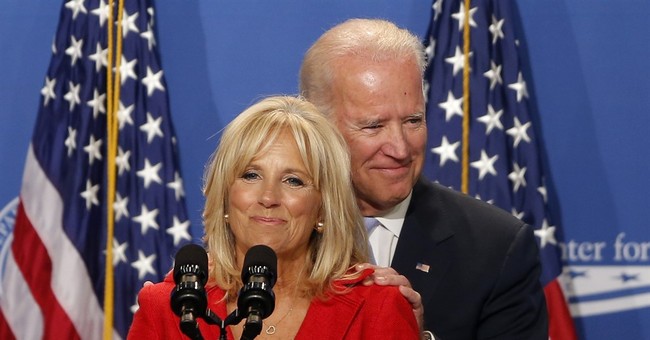 The Biden Team’s response to a Wall Street Journal op-ed suggesting Jill Biden stop using the title “Dr.” since she’s not an M.D. brought far more attention to the matter than if they had said nothing at all. Fox News’s Tucker Carlson, for example, touched on the issue during his Monday program, diagnosing her with a “very bad case of status anxiety.” But on Wednesday, he had even more to say about the matter after reading the “embarrassing” dissertation, which he said is “our national shame.”

Acknowledging perhaps that assessment was a bit “cruel,” he nevertheless went on to point out that the dissertation is littered with typos and appears in places “to be written in a foreign language using English words.”

Carlson picked out a few examples, including several instances of her math failing to add up.

But she wasn’t his only target. He also called out the college “that considered this crap scholarship,” adding that it was “embarrassing…to our entire system of higher education, to the nation itself.”

The Fox News host disagreed with those who took issue with the criticism of Jill Biden as “sexist,” when in fact “we call Dr. Jill’s husband dumb all the time.”

“So it’s not a sexism thing. What it is actually is a class thing,” he said. “We have a class system in this country. And it’s based on credentials like the ones Dr. Jill Biden has.”