Arizona AG Demands Answers Over Sharpie Use at Voting Centers 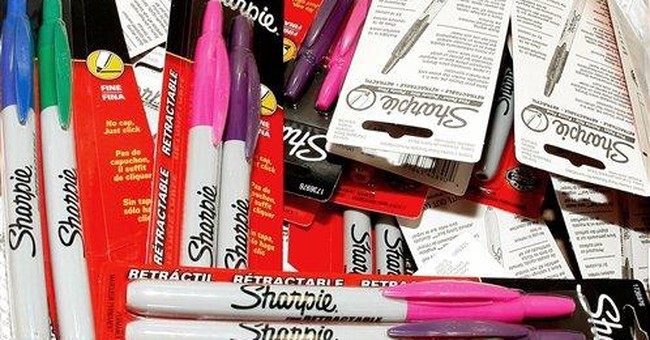 Accusations of fraud are being shared on social media from Election Day in Arizona after voters said election workers were distributing Sharpies instead of ink pens to fill out ballots, claiming that the use of a Sharpie prevents the ballot from being accepted.

But Maricopa County election officials explained on Election Day why they were using Sharpies.

"Did you know we use Sharpies in the Vote Centers so the ink doesn’t smudge as ballots are counted onsite? New offset columns on the ballots means bleed through won’t impact your vote!" the Maricopa County Elections Department tweeted.

Did you know we use Sharpies in the Vote Centers so the ink doesn’t smudge as ballots are counted onsite? New offset columns on the ballots means bleed through won’t impact your vote! Find a location before the polls close at 7 p.m. today at https://t.co/8YEmXbWyRL. pic.twitter.com/KKG2O8rQhf

Beyond just being accepted, they were reportedly the preferred method of marking ballots.

You read that correctly. Sharpies are allowed. That's because the new tabulation equipment counts votes in a such a way that bleed-throughs are not a problem.

Not only are Sharpies accepted when filling out a ballot in Maricopa County, they are preferred. That's because Sharpies have the fastest drying ink.

The one color you do need to worry about is red ink.  The tabulation equipment can't read red ink. (AZ Family)

Still, legitimate questions are being raised by some people's experiences with using Sharpies versus pens, who said the votes weren't counted.

Below are some of the widely-circulated social media posts that originally raised red flags.

WATCH THIS NOW. Share this far and wide! VOTER FRAUD is REAL and is HAPPENING. #votingfraud #fraud #Election2020 @realDonaldTrump pic.twitter.com/fqaJk0vUCc

I also was given a sharpie pen in Scottsdale, AZ and remembered thinking it was not great that when I flipped my paper over you could see my bubbles bleed through slightly https://t.co/G1ZoJ6QFWZ

Update: In Pima County, officials were discouraging the use of Sharpies, but said where the "intent can be discerned" the vote will be counted. Arizona election officials need to clear up the discrepancy in their messaging.

If it does bleed through, the ballot will most likely get sent for duplication so it can be read by the scanner. The image is the text from the @SecretaryHobbs Elections Manual, Chapter 10, Section D, subsection 3. 2/3https://t.co/3ANZ7oKMwZ pic.twitter.com/Kjn5H4tChL

All ballots in which voter intent can be discerned will be counted. That's also in the manual. No ballots will be discarded because of the method used to color in the ovals.

Someone asked a really good question. If there’s even a potential for an issue, why have sharpies? Why mention them at all? “Because it rarely happens.” pic.twitter.com/onI5bEpdqK

We have received hundreds of voter complaints regarding Sharpies at polling locations. Accordingly, we sent this letter to Maricopa County election officials. Let's get some answers. Read our letter here: https://t.co/c6FSFZiNj7 pic.twitter.com/HnZ16UTTrs

Based on correspondence and conversations with Maricopa County officials, we are now confident that the use of Sharpie markers did not result in disenfranchisement for Arizona voters. We appreciate the county’s prompt insight and assurances to address public concerns. pic.twitter.com/NdYLsEAvwd