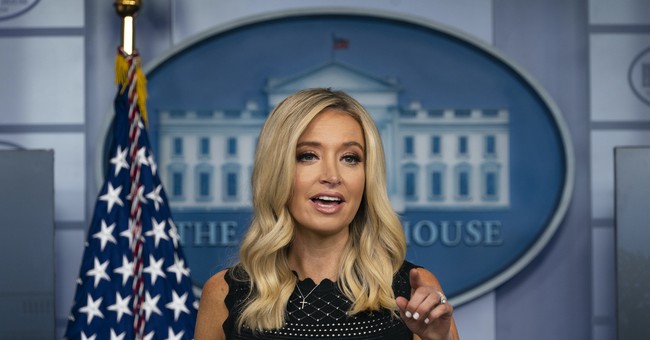 White House Press Secretary Kayleigh McEnany called out a reporter for his question about the president’s “political speech” this week in the Rose Garden, pointing out that what he was really asking about was the Hatch Act. To clear things up, McEnany reminded him just what exactly the federal law states.

The reporter started by asking about two recent events he claimed wouldn’t have been done by previous administrations.

“The first was the campaign meeting in the Cabinet Room last month, and then the political speech in the Rose Garden this week,” he said. “Can you talk about your understanding of what the White House policy is for this White House, as far as politics?  Is there any place in the White House where you think politics is inappropriate?  And where do you — where do you draw the line?”

The reporter claimed his question had nothing to do with the Hatch Act.

“It has everything to do with this,” she replied. “Go read the Hatch Act.  That’s what you’re alleging that is problematic with the president.”

“But what your real problem was, was the fact that the president gave a very good, powerful speech from the Rose Garden.”

Press Sec. Kayleigh McEnany: "We act in accordance with the Hatch Act." pic.twitter.com/qY7N3Y2Csv