Protesters Set Up 'Guillotine' In Front of Jeff Bezos's House 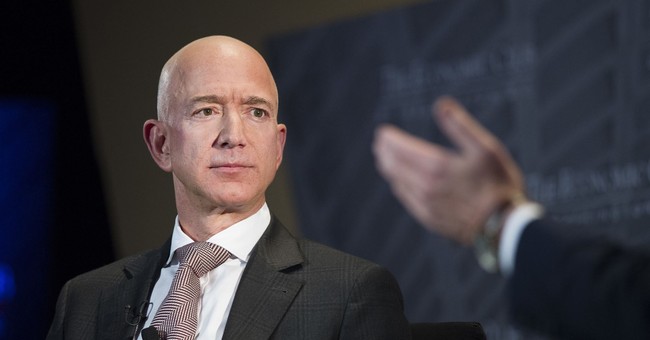 Demonstrators in Washington, D.C., showed up in front of Amazon founder and CEO Jeff Bezos’s house on Sunday, with a mock guillotine and a sign that read “support our poor communities not our wealthy men.”

In an announcement about the march, the activists called for Amazon to be abolished.

It's an uprising, and we're taking it to our neighbor @JeffBezos' house #dcprotest pic.twitter.com/D70BWwZ3o8

“Amazon works directly with police to surveil us, stoking racist fears in the name of profit. Doubling down on their union busting and mistreatment of workers, Amazon fired and racially slandered labor organizer Chris Smalls. Join us to tell Jeff Bezos enough is enough!” the flyer said. “End the abuse and profiteering. Abolish the police, the prisons, and Amazon.”

DC protesters have set up a “guillotine” in protest of Jeff Bezos in front of his complex in DC pic.twitter.com/VZ0AWTJqaV

One protester stood in front of his home with a bullhorn and said, “it is still exploitation and when they become threatened, and we have no voice, the knives come out.”

The demonstration marks a rise in protesters taking events to residential neighborhoods. Black Lives Matter showed up in a Beverly Hills, California, residential area over the weekend, shouting, "Eat the rich!" Activists also marched through a St. Louis, Missouri, private community, where some home owners came out with their firearms to protect their property.