Why China Is Upset After G7 Meeting on Wuhan Coronavirus 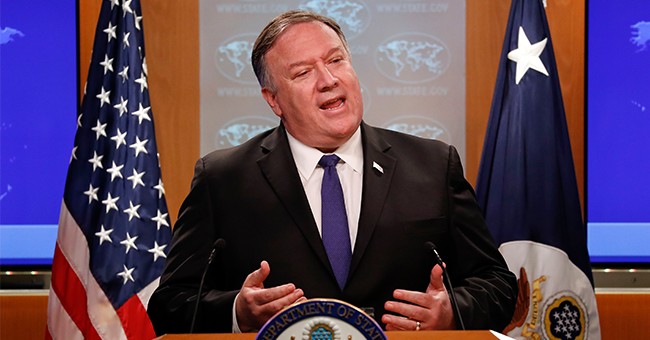 China’s government is livid after Secretary of State Mike Pompeo reportedly insisted on calling COVID-19 the 'Wuhan virus' and pressing G7 leaders to do the same during a remote meeting this week to discuss the coronavirus pandemic.

“He has a very sinister motive,” Foreign ministry spokesman Geng Shuang said in a statement, noting he was trying to "stigmatize China and discredit China’s efforts in an attempt to divert attention and shift responsibilities.”

According to reports, G7 leaders could not come to an agreement on a joint statement over the term “Wuhan virus.”

Pompeo appeared to double down when asked about it.

“We’ve wanted to work with the Chinese Communist Party throughout this crisis — this crisis that began in Wuhan, China,” he said. “We tried, you’ll remember, from the opening days to get our scientists, our experts on the ground there so that we could begin to assist in the global response to what began there in China, but we weren’t able to do that. The Chinese Communist Party wouldn’t permit that to happen."

“You’ll recall, too, at the beginning of this, when it was clear that this was an issue, China knew about it, they were the first country to know about the risk to the world from this virus, and they repeatedly delayed sharing that information with the globe,” he continued.

Asked whether the U.S. would hold China accountable, Pompeo said a time will come when the world will be ready to "evaluate responsibility for what took place."

God bless @SecPompeo for calling it like it is. Communist China destroyed evidence, silenced whistleblowers and allowed the Wuhan virus to spread around the globe. pic.twitter.com/CT9PKQheGr