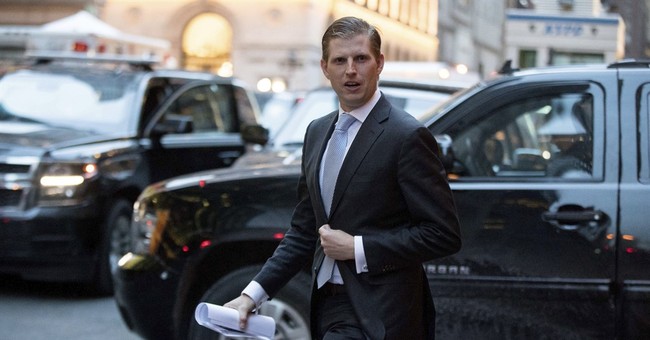 As some Republican lawmakers and members of the Trump administration have been kicked out of restaurants or harassed while dining out, Eric Trump said Tuesday that a restaurant employee spit on him during a visit to Chicago.

“For a party that preaches tolerance, this once again demonstrates they have very little civility,” he told Breitbart. “When somebody is sick enough to resort to spitting on someone, it just emphasizes a sickness and desperation and the fact that we’re winning.”

The incident was brought to light by NBC 5 Chicago political reporter Mary Ann Ahern, who said it took place at the Aviary cocktail bar. She reported that the offender was in Secret Service custody.

Hearing of incident at Aviary tonight, an employee allegedly spit on son of @realDonaldTrump who is visiting Chicago, offender now in US Secret Service custody

Police presence outside Aviary after alleged incident between an employee and Eric Trump around 8:30pm pic.twitter.com/1oIiVfsiKj

“CPD was on scene and assisting the United States Secret Service with a law enforcement matter,” he said. “Any and all inquiries regarding a federal protectee must be directed to the Secret Service.”

Trump described the incident as “purely a disgusting act by somebody who clearly has emotional problems.”