Read: This Is Nielsen's Resignation Letter to Trump 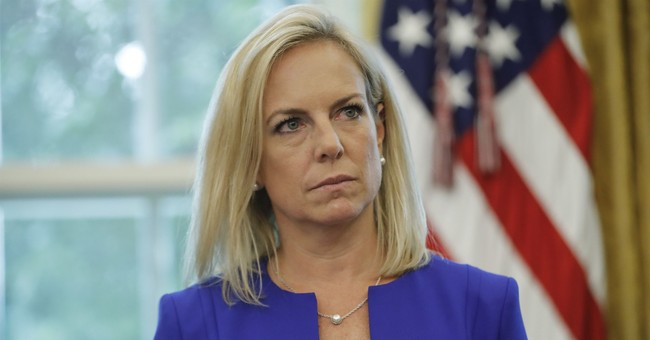 Nielsen, who had been on the job for 16 months, said in a series of tweets releasing her letter that her time with DHS was the "honor of a lifetime."

This afternoon I submitted my resignation to @POTUS and thanked him for the opportunity to serve in his administration.

To the brave and dedicated men and women of @DHSgov, I submitted my resignation to the President this evening. I am eternally grateful and proud of what you do each and everyday to protect our homeland- each of you are why I came back to serve my country.

Our missions as a Department are vast and have never been more vital. You are in the arena- keep up the good fight. Thank you for your sacrifices and those of your families. God bless you and God bless our great country.

I hereby resign from the position of Secretary of the U.S. Department of Homeland Security (DHS), effective April 7th 2019. It has been my great honor to lead the men and women of the Department as its sixth Secretary. I could not be prouder of and more humbled by their service, dedication, and commitment to keep our country safe from all threats and hazards. I join all Americans in thanking them for their sacrifices and those of their families.

For more than two years of service beginning during the Presidential Transition, I have worked tirelessly to advance the goals and missions of the Department. I am immensely proud of our successes in transforming DHS to keep pace with our enemies and adversaries — whether it is in cyberspace or against emerging threats from new technologies.

Despite our progress in reforming homeland security for a new age, I have determined that it is the right time for me to step aside. I hope that the next Secretary will have the support of Congress and the courts in fixing the laws which have impeded our ability to fully secure America’s borders and which have contributed to discord in our nation’s discourse. Our country - and the men and women of DHS - deserve to have all the tools and resources they need to execute the mission entrusted to them.

I can say with confidence our homeland is safer today than when I joined the Administration. We have taken unprecedented action to protect Americans. We have implemented historic efforts to defend our borders, combat illegal immigration, obstruct the inflow of drugs, and uphold our laws and values. We have responded decisively to record-breaking natural disasters and helped Americans rebuild. We have prevented the disruption of U.S. elections and guarded against foreign interference in our democracy. We have replaced complacency with consequences in cyberspace, we are holding digital intruders accountable, and we are stepping up our protection of American networks. We have thwarted terrorist plotting against our homeland and launched new efforts to block terrorists and criminals from reaching our shores. And we have ramped up security measures to make it harder for our enemies and adversaries to attack us, whether it is with drones, chemical and biological weapons, or through other means.

Thank you again for the privilege to serve the American people and to lead the outstanding men and women of the Department of Homeland Security. Supporting these patriots has been the honor of a lifetime.

The president named Kevin McAleenan, head of Customs and Border Protection, to serve as acting secretary of Homeland Security.

Nielsen said she will stay on the job until Wednesday to ensure an "orderly transition."

I have agreed to stay on as Secretary through Wednesday, April 10th to assist with an orderly transition and ensure that key DHS missions are not impacted.