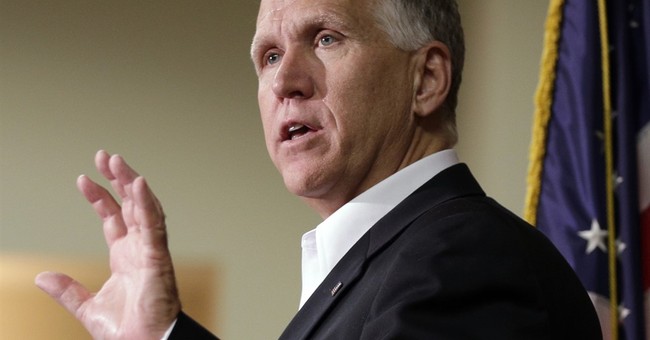 "I would vote in favor of the resolution disapproving of the president’s national-emergency declaration, if and when it comes before the Senate," Tillis wrote in an op-ed published in the Washington Post.

President Trump has few bigger allies than me when it comes to supporting his vision of 21st-century border security, encompassing a major investment in technology, personnel and infrastructure, including new physical barriers where they will be effective. […]

From the perspective of the chief executive, I can understand why the president would assert his powers with the emergency declaration to implement his policy agenda. After all, nearly every president in the modern era has similarly pushed the boundaries of presidential power, many with the helping hand of Congress.

In fact, if I were the leader of the Constitution’s Article II branch, I would probably declare an emergency and use all the tools at my disposal as well. But I am not. I am a member of the Senate, and I have grave concerns when our institution looks the other way at the expense of weakening Congress’s power. (WaPo)

Tillis went on to remind his colleagues that they once criticized former President Obama for using executive actions and bypassing Congress.

“There is no intellectual honesty in now turning around and arguing that there’s an imaginary asterisk attached to executive overreach — that it’s acceptable for my party but not thy party,” he said, reminding his party that Democrats will one day control the White House again and use Trump’s national emergency declaration as precedent to “advance a policy that couldn’t gain congressional approval.”

The House will vote on the resolution Tuesday, where it’s expected pass. The Senate will then take up the resolution, where it will need a simple majority to clear the upper chamber. This means Democrats—assuming all support the resolution—need four GOP defectors. Tillis is would likely be joined by Sens. Lisa Murkowski and Susan Collins in supporting the measure.

President Trump has vowed to veto a resolution terminating his declaration.