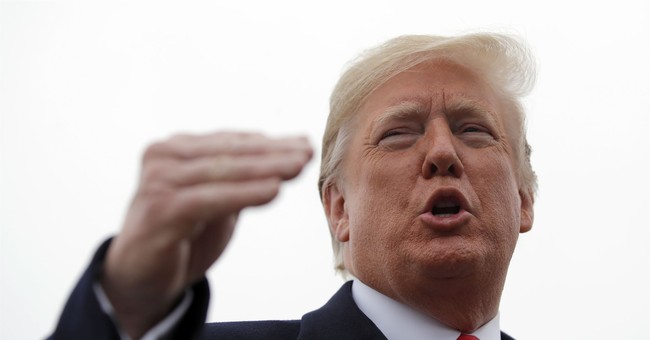 Update: He just responded to questions about it from reporters Friday morning.

Pres. Trump says there "could be" a federal roll in possible Florida recounts.

Razor-thin margins of less than 0.5 percentage points currently separate the candidates in both the senatorial and gubernatorial races. https://t.co/msqT6KyQRF pic.twitter.com/mwRDY0uIBQ

“You notice the votes never go the other way?” Trump said. “They hire lawyers, and the votes don’t ever seem to go the Republican way…I don’t know. You tell me. It’s always the Democrats.”

He continued: "There’s a lot of bad stuff going on in this country, and we’re finding out. And I’m getting to the bottom of it. And I’ve done a hell of a job.”

Update II: And later on Twitter he used the incident to mock Democrats' obsession with Russia.

You mean they are just now finding votes in Florida and Georgia – but the Election was on Tuesday? Let’s blame the Russians and demand an immediate apology from President Putin!

“Law Enforcement is looking into another big corruption scandal having to do with Election Fraud in #Broward and Palm Beach,” he said. “Florida voted for Rick Scott!”

Thousands of additional ballots from two heavily Democratic counties in Florida are continuing to be reported.

In a series of tweets, Florida Sen. Marco Rubio is crying foul over the process, worrying that Dems are trying to steal the election.

How can anyone have confidence that the #BrowardCounty election supervisor will be fair when last night she made clear her personal animus toward Gov. Scott & towards the states top law enforcement agency when she claimed he “owns” the #Florida Department of Law Enforcement? https://t.co/K1lrwzRcnE

Under #Florida law county must upload by 7 p.m. day BEFORE election ALL early votes canvassed & tabulated by end of early voting & report results within 30 minutes of polls close

60 hours after that deadline only 1 of 67 counties is still counting early votes, #BrowardCounty pic.twitter.com/oP7HdpZcTk

Recounts in close races are automatic under #Florida law & I support a #FloridaRecount2018 100%.

What is happening in #BrowardCounty isn’t about a recount. As Dem lawyer said "We're doing this not just because it's automatic,but we're doing it to win," https://t.co/w2y03m9Ay6

“The #Broward Elections Supervisor has been pulling stunts like this for years and we’re not going to let her get away with it,” she said on Twitter.

"I will not stand idly by while unethical liberals try to steal an election," Scott said.