Arizona's Senate Election Results Were Updated--Here's Where the Race Stands 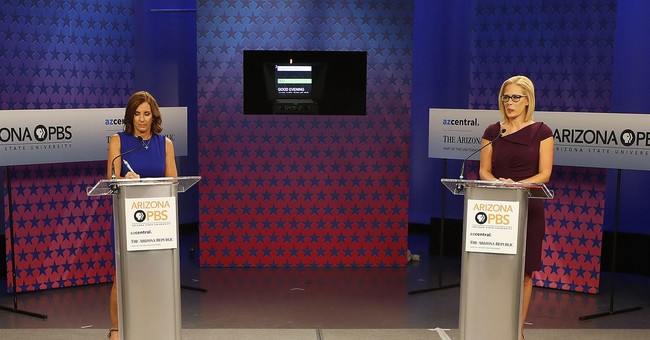 Sinema now has 49.1 percent of the votes so far while McSally has 48.59 percent.

As The Arizona Republic reports, “It’s too soon to know who will ultimately prevail.”

"With half a million ballots left to count we remain confidence that as votes continue to come in from counties across the state, Martha McSally will be elected Arizona's next Senator," Bognet said in a statement.

Fox News host Laura Ingraham disagreed, tweeting Thursday: “Just got a text that Pima County (Tucson) numbers just came in and Sinema is now up by 9,000. Very unlikely McSally wins at this point. The trend will likely continue.”

Just got a text that Pima County (Tucson) numbers just came in and Sinema is now up by 9,000. Very unlikely McSally wins at this point. The trend will likely continue.

The Green Party candidate Angela Green, who dropped out before Election Day and ended up backing Sinema, dismissed accusations that she was a “spoiler” in the race.

“I know the Democrats think all 3rd party voters would’ve chosen them, but I’m sorry to say that’s just not the case. Same goes for the Republicans,” Green posted on her campaign website. “No 3rd party candidate should have to endure accusations of being 'spoilers' just because the 'winner takes all' two-party system is severely broken. This is a complete travesty. It’s time for change.”

She continued: “I knew I wasn’t going to win, so being a true candidate for the people and not the politics, I felt that if I withdrew and could endorse a candidate closest to the ideas and views of those whom I represent, then at least I can feel as though this withdrawal from the Senate race will not be in vain.”